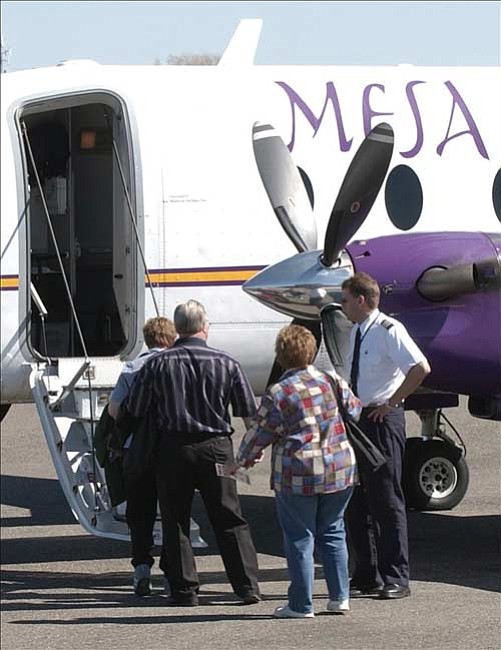 The Daily Courier file/Jo. L. Keener People will again be able to board a Mesa Airlines plane at Prescott’s Love Field according to the Thursday announcement that the carrier won the contract for service to the Prescott area. The carrier had lost their contract in 2005 to Great Lakes Airlines.

PRESCOTT - Mesa Airlines will fly in and out of Prescott once again.

Simmons said that starting in July, Mesa Airlines would run two flights a day to Phoenix and one flight to Las Vegas. Passengers can continue their trips on US Air. He said officials have not determined the exact start of service.

The mayor said Las Vegas has more connections via US Air than Phoenix.

Another benefit, Simmons said, is that Mesa Airlines has "code share" with US Air, which allows passengers to ticket their flights straight through to their destination."

In May, the Prescott City Council listened to residents and recommended that Mesa Airlines once again provide service to the area.

Mesa Airlines provided service to the Prescott area until 2005, when the Arizona Department of Transportation-administered consortium of rural airports overruled Prescott's recommendation and chose Great Lakes to provide service.

That resulted in a drop in passenger numbers over the past two years - a development city officials attributed to the change in terminals at Sky Harbor.

Mesa Airlines and Great Lakes submitted similar financial proposals to the city. A major different was the cost of fares.

Great Lakes' fares would be about $87 one-way to Phoenix, and about $71 for the flight to Las Vegas.

Simmons said with the new service starting "this fiscal year, we will have the chance to see the

The mayor said the exciting thing about flight service to Las Vegas is the possibility of adding additional flights.

"The writing is on the wall. If Mesa ends up with a lot of Vegas traffic, you know they will add flights," Simmons said.