Destination: The beaches of Oregon 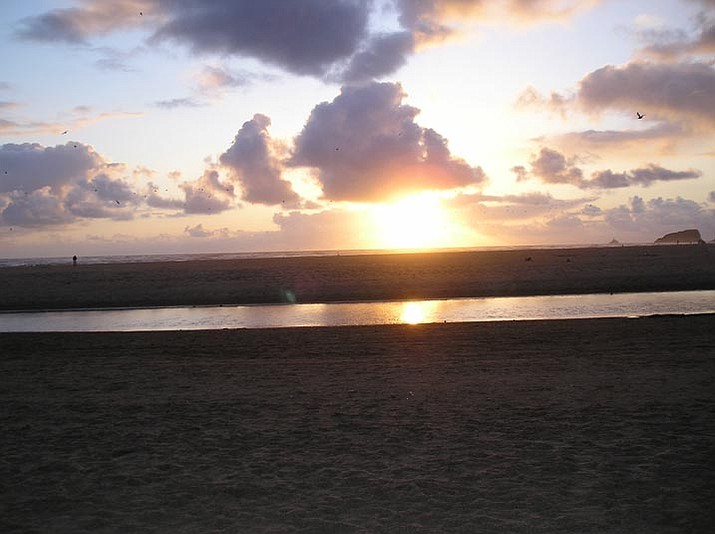 While planning a Memorial Day weekend getaway, my husband Miles mentioned a place he had briefly visited while traveling from Seattle to California: Cannon Beach, Oregon.

We took advantage of Southwest Airlines' reasonable fares and booked a round trip flight from Phoenix to Portland, at the amazing price of $99 each way. Later though, when we decided to extend our trip by another day, we experienced "sticker shock," as Southwest's one-way price from Portland to Phoenix had increased to $270! I suppose, when planning one of these quick, getaway weekends, it is better to be overly optimistic about just how much time you want to be away.

As seems to be the norm these days, our 8:30 p.m. flight from Phoenix was crowded. The seats were not the most comfortable, and the 2.5-hour flight to Portland seemed interminable. We made good use of our Southwest drink coupons (Southwest's Rapid Rewards members can purchase a book of 10 coupons for just $10, a great deal). We arrived in Portland's nearly deserted airport after 11 p.m. and, having reserved a room close-by to insure an early start in the morning, we took a "courtesy" van to the Rodeway Inn.

Two things immediately greeted us upon our arrival at the motel: the stench from the nearby glass factory and, somewhat appropriately, the industrial-like setting of our overnight accommodations. It seems that the Rodeway Inn portion of the motel complex was in the midst of a long-overdue remodeling project, a trifling fact we did not learn until checkout the next morning. We spent a harrowing night in our circa-1972 room, facing the parking lot and the rear of the adjoining Quality Inn. Had we known better, we could have slept in one of the Quality Inn's newly refurbished, 21st-century rooms for just $15 more, but sadly for us neither the motels' Web site nor the grumpy night shift desk clerk bothered to mention it.

The next morning, before we beat a hasty retreat from our overnight cell, I did manage to discover a green escape in Maywood Park during a run, but I was quickly concluding that Portland was not a place to hang out. We endured our complimentary breakfast of fake eggs, weak coffee and a carbo-loaded Danish before we picked up the rental car - that is another story - and set out for Seaside, on the Pacific coast about two hours from Portland.

Miles had cautioned me that Seaside, Ore., bears a strange resemblance to Belmar, New Jersey, but, since I had never been "Down the Shore," I brushed aside his warnings and found myself looking forward to Seaside's charming boardwalk and oceanside activities. I should have listened to my husband.

We found hordes of tourists, of all shapes, sizes and ages, crowding the sidewalks and streets (rental bicycles and sundry pedal-powered contraptions are evidently en vogue among those who dislike walking from one block to another).

Our new lodging, nearly the same as our old, offered no relief or promise of a decent night's sleep. The Seaside Inn was also undergoing a remodeling project, and the parking was nearly full of trucks, vans, trailers RVs and cars of all kinds. What is it with motel remodeling during tourist season?

We had reserved two nights at this place, only because we had been unable to find anything in Cannon Beach, just eight miles south. Our initial impressions of

Seaside, the motel and the room having proven unfavorable, our first task was to try again for a room at Cannon Beach. Flipping through a local magazine, I found an advertisement for a beachfront cabin, available through a last-minute cancellation for a mere week's salary.

Having secure peace of mind, Miles and I enjoyed a long walk along the beach in Seaside (we could not find the so-called boardwalk, unless it was the few feet of slatted walkway along the river a few feet from the motel). At least we enjoyed the beach, though we found ourselves dodging children, kite-flyers, surf anglers and the occasional dog running free of any apparent human supervision. But heck, we had made it to the beach, the weather was cool, and yes, the air was moist!

Deciding to forego the pleasures of crowd fighting and noise in the local "family-friendly" restaurants, we dined on take-out Chinese while watching a rental video from the motel's barely adequate stock of 1980's flicks. So much for our first night at the beach.

Our trip improved dramatically upon our arrival in Cannon Beach. What a difference eight miles and a dissimilar developmental philosophy can make on one's psyche! Our room at Webb's Surf and Sand motel really was on the beach, or just 10 steps above it. The room looked out over acres of sand, a natural tidal channel, huge rocks in the ocean and a lighthouse just offshore. Haystack Rock, Cannon Beach's most famous attraction, jutted from the surf a short distance down the beach. This mammoth basalt formation towers 235 feet above the shore. When the tide recedes, it exposes a wonderland of tidal pools and sea-life.

Strolling around the area, we saw numerous houses for rent, some offering beachfront vistas. A nice idea, but totally unrealistic to most of us considering their weekly rates. We found a restaurant with outside seating, offering fresh Dungeness crab and salmon.

Adding a bottle of the famous Oregon Pinot Noir to our order, we finally felt at ease. The salt air, 100 percent humidity and sandy surface made for the best run I have had in a year. This was what we had journeyed to experience.

Begrudgingly, on Memorial Day morning we left the waves behind and took an evergreen, windy route back to Portland. Due to our early departure scheduled for the next day, we had reserved a room at a bed & breakfast in the city's historic Irvington District. The Lion and the Rose, an imposing Queen Anne-style Victorian inn, featured an exuberant innkeeper who actually let us explore all of the rooms, including the attic and basement.

We stayed in the Lavonne Room, which boasted a turret sitting room and claw-foot bathtub. We found the Irvington neighborhood to be unbelievably green, with its tall trees and front yards overflowing with roses, begonias and vegetable gardens. Very few homes had what some might consider a properly manicured front lawn, but those that did made ample use of water sprinklers and lawn mowers. I felt like we were in a foreign country. We found an abundance of restaurants and shops just around the corner, and took a pleasant walk along the tree-lined streets around the bed and breakfast.

In the end, Portland reminded me of Chicago, Toronto and Stockholm. I was happy to put the airport room experience out of my mind and decided that another trip to Portland will be worth our time.

We want to explore the famous Japanese Garden, the Classical Chinese Garden, Powell's City of Books, the Saturday Market, Old Town, the Pearl District, the Columbia Gorge and Mount Hood. So, I will be running the Portland Marathon on Oct., 7 to get up close and personal, and discover the city on foot. My husband says he will cheer me on from some sidewalk cafe, preferable one that offers oyster shooters.