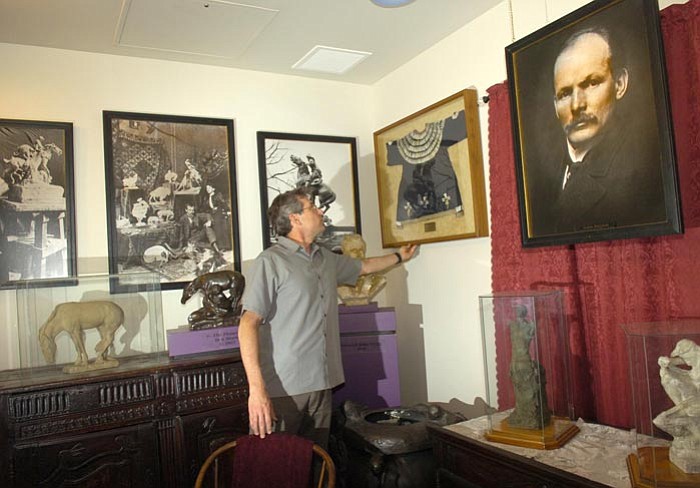 PRESCOTT-For 100 years, Prescott area residents and visitors have enjoyed the Roughrider sculpture at the courthouse plaza in downtown Prescott.

Art critics recognize the statue as one of the best examples of horse sculpture in the world.

As impressive as this larger-than-life sculpture is, the Prescott Valley Civic Center is home to 27 other pieces by the same artist, Solon Borglum.

Ijams said the sculptures sat in storage "from 1987 to 1998. Individual pieces would be pulled out for display, but the collection had no permanent home."

The Sharlot Hall Museum originally displayed the collection. The museum remodeled and the collection moved to First National Bank. When the art trust had to vacate the bank, it elected to surrender the collection to Prescott Valley.

An alcove at the Prescott Valley Civic Center is the home for the furniture, plaster casts, photographs and child's dress, which Ijams said "Borglum's daughter wore and was probably made by Native Americans from South Dakota."

In the early 20th century, any mention of the 'sculptor Borglum' typically referred to Solon Borglum.

Today, most people associate the Borglum name with his brother, Gutzon, the artist who sculpted Mount Rushmore.

Solon, 15 months younger than his brother, earned international fame as an artist much earlier than Gutzon. Artistic rivalry flared between the brothers when Gutzon reneged on his promise to restrict his art to painting.

The Borglum family came to America from Denmark Danish immigrants and settled in Omaha, Neb., in 1869. Gutzon studied art in California, while Solon managed his father's 6,000-acre ranch. Later, Solon attended the Cincinnati Art Academy and sold enough sculptures to study in Paris.

He rapidly won recognition as "Le Sculpteur de la Prairie" for his realistic portrayal of horses, Indians and cowboys, subjects he was familiar with from living on the Great Plains.

In 1904, Solon turned away from Great Plains subjects and began creating monuments.

In 1906, Solon Borglum and his family moved to Rocky Ranch at Silvermine, Conn. For the rest of his life, he created sculpture of historical and classical subjects.

When World War I erupted, Solon was almost 50 years old. He joined the YMCA and served with the French Third Army as a manager for a mobile canteen. Members of the canteen gave soldiers chocolate, coffee, cigarettes and emotional support. The French government awarded Solon the Croix du Guerre medal for his work.

Despite his early death and the fact that Gutzon was ultimately more famous, the beauty of Solon's work remains.

In June, officials from the Borglum Historical Center in Keystone, S.D., asked the Yavapai County Board of Supervisors for permission to make a mold and a bronze casting of the Buckey O'Neill statue at the Historic County Court House.

The supervisors are negotiating with the Borglum family and the historical center about the project.

Supervisor Carol Springer said the board supports the request, with a few stipulations. She said Yavapai County would own the mold and the historical center would be responsible for any damage to the statue.

"We would like to choose one of the historical center's pieces to reproduce for one of our new county buildings," Springer said.

"What makes this piece so interesting," Springer said, "is the base. The base is local granite and adds to the majesty of the piece."

She said the Roughrider statue "has always been the symbol of Yavapai County; its history and its traditions. Its placement at the courthouse was an inspired decision by city fathers in the past."

However, to appreciate the talent of Solon Borglum, residents and visitors may visit the collection within the Prescott Valley Civic Center.

It is definitely worth the trip.

"He is in sculpture what Walt Whitman is in literature, a force as virile, as elemental, and un-self-conscious as wind or rain. To study his art sympathetically is to thrill to the rugged truth and beauty of primal things."