Library Ladies: Dive into books of myths, magic and heroes 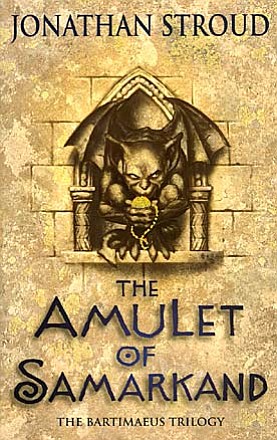 Harry Potter is the hot topic this week with Harry Potter and the Order of the Phoenix in theaters and Harry Potter and the Deathly Hallows being released in bookstores on July 21. In honor of this notable event we are dedicating this column to fantasy books. According to the Web site Genreflecting (www.genreflecting.com), "fantasy is the stuff of myth, of flights of fancy, folklore, fairy tales, magic and heroes." There is also time travel, paranormal powers, shape shifters and game worlds. Wherever your imagination takes you is the stuff of fantasy books. Take a trip into fantasy with these selections.

The Amulet of Samarkand by Jonathan Stroud. Grades 5 and up. 2003.

This fast-paced fantasy is set in an England ruled by wizards, where non-magical citizens are ruthlessly oppressed. That may sound familiar, but these wizards acquire their powers in a most unusual way - by enslaving ancient spirits known as djinn. In this first novel of the Bartimaeus Trilogy, apprentice wizard Nathaniel teams up with a reluctant djinn to steal a powerful amulet from an even more powerful wizard. Complex characters and an unusual take on magic help this trilogy stand out from the pack of fantasy books for this age group. - Amadee Ricketts

Menolly loves music but her father forbids her to even hum a tune because she's a girl. He believes men are musicians on Pern, a planet where deadly "thread" falls from the sky. Menolly runs away from home and takes refuge in a cave where she discovers rare fire lizards (colorful little dragon-like creatures). The fire lizards and her music bring new adventure and direction to her life and she becomes the first female Harper. McCaffrey, best known for her Pern books, has written many fantasy tales. This one is the beginning of the Harper Hall Trilogy. - Claudette Simpson.

One Unicorn written and illustrated by Gale Cooper

Though not a new book, 1981, One Unicorn is a classic fantasy picture book for grades 2 through 4. The illustrations are rich and beautiful, almost tapestry-like. A princess story, and a unicorn story this fantasy is about a father, the King trying to protect the innocence of his child and of a princess who tries to protect a beautiful unicorn. - Joyce Read

Season of the Witch by Natasha Mostert. 2007

Mostert weaves elements of fantasy and science fiction with a gothic atmosphere to create a phenomenal story. The husband of an ex-girlfriend, Frankie, has asked information broker Gabriel Blackstone to find his missing son. Blackstone, a "remote viewer", taps into the mind of the missing son and discovers he has been murdered by one of two compelling, desirable sisters. In investigating the two bewitching sisters, Gabriel falls in love with one. But is she the murderer? Gabriel gets drawn into the occult and "Art of Memory" world of Morrighan and Minnaloushe. Mostert's suspenseful tale will keep you hooked to the last page. - Anna Smith