Federal law also can cause problems for Indians themselves 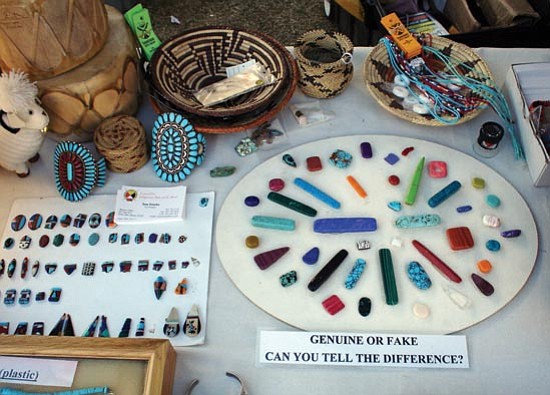 Courtesy Council for Indigenous Arts and Culture --- Most of the items on this oval at bottom right are plastic; only nine are real stones.

Originally Published: July 13, 2007 6:22 a.m.
Tweet
Read Joanna Dodder's related story, 'With Indian art, it's often buyer beware' by clicking here.   PRESCOTT - Federal Indian art laws can hurt some of the people they're meant to protect, but local experts don't see any good way around it. To separate American Indian artists from those who knowingly try to violate the law, federal law generally requires the artists to have proof of membership in a federally recognized tribe. The Prescott Indian Art Market has had to turn some artists away because they didn't have tribal cards, even though art show manager Sandy Lynch and her Indian Advisory Council members knew the artists were American Indians. For example, some tribes such as the Hopi grant enrollment based on matriarchal or patriarchal lineage. So if a mother or father marries outside of the tribe, the children automatically are out of the tribal membership. That's what happened to Carol Snow, a former Prescott Indian Art Market exhibitor, Lynch related. Her mother was a member of one Iroquois Nation band that required patriarchal lineage, and her father was the member of another band that required matriarchal lineage. So even though she technically was a "full-blooded" American Indian, she couldn't enroll in either band. Lynch has personal experience with this issue. Until the late 1980s, Canada didn't allow tribal lineage through the mother's side. Lynch's mother came from Canada's Ojibway tribe. Luckily, she was a member of the Baker Lake Inuit tribe of Canada on her father's side. Realizing this issue, the U.S. government created an alternative to the tribal enrollment card called a "certified Indian artisan" designation that tribes can choose to issue, Lynch said. The Iroquois gave Snow such a card, but sometimes tribes are suspicious of the law or involved in disputes that prevent people from getting such cards, Lynch said. For example, in the 1940s when some Apache families left New Mexico en masse for road-building jobs in California, the remaining tribal members who didn't get these well-paying jobs kicked them out of their tribes, Lynch said. Some non-Indian artists also show up at shows with fake cards, but the Indian artist community can weed them out, Lynch said. "It doesn't take long for the word to get around," agreed Don Owen, who used to run the Santa Fe Indian Market. Sometimes people who have the required ancestry still aren't tribal members because their ancestors didn't sign up. That's what happened when members of the Five Civilized Tribes failed to sign up for the Dawes Roll a century ago, Cherokee artist Jesse Hummingbird said. Luckily, his grandparents enrolled. "A lot of people are out there in the cold," Hummingbird said. "They've got to research their ancestry." While the federal law's requirements related to federally recognized tribes works for most American Indians, Lynch still has concerns about labeling American Indians according to their "blood quantum," a term that arose from Indian treaty annuity entitlements more than a century ago. Contact the reporter at jdodder@prescottaz.com.
Contact
Sign up for Courier e-News Alerts
Most Read
7 days
30 days