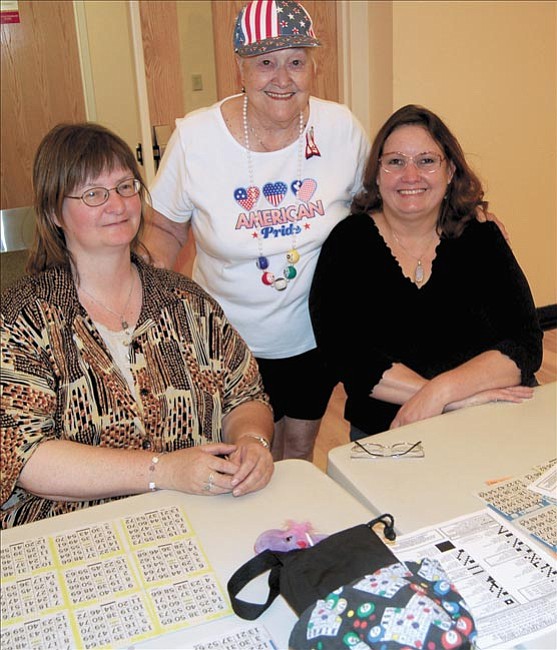 The Daily Courier/Derek Meurer From left to right: Linda Landrum, Maggie Mitchell and Samantha Carlson display that bingo paraphernalia before playing in the bingo games at The Adult Center of Prescott on June 5.

PRESCOTT - Both seasoned professionals and curious amateurs are welcome. The game requires keen concentration, fast reflexes and a strong set of lungs with which to yell, "Bingo!"

On July 1, The Adult Center of Prescott hosted the debut games of the new program of bingo nights. The center's executive director, Joan Shay, said the turnout was robust, with 85 bingo players participating in the event.

"Our official grand opening games were a great success," Shay said. "A lot of people have been asking for us to get a bingo game started here. There hasn't really been bingo in Prescott for years."

"Also, running this place is very costly. We're hoping bingo will help bring in some revenue."

"I'm not usually a big bingo player, my mom actually asked me to come with her," Lynch said. "I'm really glad that I did. I was so surprised; when the ball comes up, when you see that last number, I had to catch my breath. That was a very tense and exciting moment."

"We do get a lot of hard-core players; they have their own custom gear, and all kinds of good luck charms. They're pretty intense," Shay said. "At the same time, the games are very welcoming to casual or new players, as well. Everyone can have a good time."

Shay said that the Adult Center has taken action to publicize the bingo nights in numerous ways, including placing an ad in The Courier and using word-of-mouth via the "bingo community."

"There's no place to play in Paulden," said Jim, "so we sometimes drive up to Prescott Valley, but this is where we'll be going from now on."

When asked if they carry any lucky charms Marie replied, "The only lucky charm we need is each other."

"It's about time they got bingo going in Prescott again," said Linda Landrum, of Prescott. "It's been years since they shut it down here."

Landrum came packed and ready to go, with a bingo bag and numerous items of bingo regalia and good luck charms, including a "magic wand."

"This really is a beautiful building," Mitchell said. "The screen is great; you can't miss the bingos."

The adult center uses a large projection screen to display the results of each bingo ball at extreme magnification.

"Another wonderful thing: In conjunction with the games, Meals on Wheels is there, selling meals to the players," Shay said. "It's great food, and I can't believe how little they charge for it. All the proceeds go to benefit their program, which is a great cause. I think they could charge a little more, but that's just my opinion."

For more information on the bingo program or The Adult Center of Prescott call 778-3000.