All aboard: Railroad buffs love trains ... in all sizes 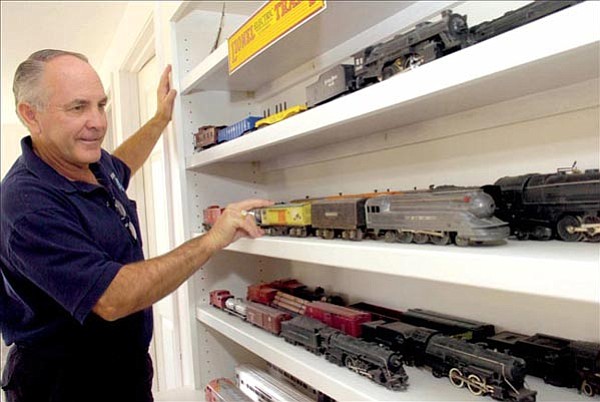 Brent Scnitzius looks over the larger Lionel and American Flyer railroad equipment on display in his Prescott home Saturday. The Daily Courier/Jo.L. Keener

PRESCOTT - Anyone with an interest in model trains or railroads should look no further than the Central Arizona Model Train Club.

Members display their enthusiasm for the hobby in all sorts of ways. Peter Atonna, who writes the club newsletter, says he has more than 1,000 feet of track in his Paulden home.

Attonna said he has a scale-size called an "O-gauge," as opposed to the popular Lionel train line.

"My entire layout is radio controlled. I can run dozens of different trains; each engine has unique sound to it. Some of the sounds will just blow your mind. In the dining car - you can hear the dining car steward calling people for dinner when the dining car is going by ... pretty weird stuff I have put together," he added.

Atonna said members are interested in different gauges depending on what appeals to them.

HO scale trains are the most common he said, as a result of the combination of the trend of trains moving to a smaller size sometime during the 1950s.

Atonna said smaller trains enable hobbyists to do more with scenery and get a lot of lay out with less room.

Atonna said he tried all different sizes, but always reverted back to O-gauge trains.

"O-gauge trains have a size and feel to them. They make sounds and rumble, roar and that sort of stuff and have what I call presence that you don't have in the smaller stuff," Atonna said, adding that he started playing with trains as a child.

Current club president Brent Schnitzius said he inherited the hobby of working with HO scale trains (about half the size of O-scale) from his grandfather.

"When he passed away, I was able to get what rolling stock he had left, so I'm just carrying on the tradition," Schnitzius said, adding that he modeled his layout after his grandfather's.

Schnitzius said he built his house with a basement planned to accommodate his model train layout.

Schnitzius guesses that his track length is well in excess of 1,000 feet.

Mike Nelson, a past president and founding member of the club, said a general interest in trains or history generally draws individuals into the hobby.

"If you're into trains at all, you start investigating the hobby a little bit," he said.

Nelson currently is building a layout in the two-car garage of his home in Dewey-Humboldt.

The Central Arizona Model Railroad Club meets the second Wednesday of every month at the First Lutheran Church in Prescott.

The club conducts its biggest event, a swap meet on Aug. 18, at the Grace Sparkes Activity Center.