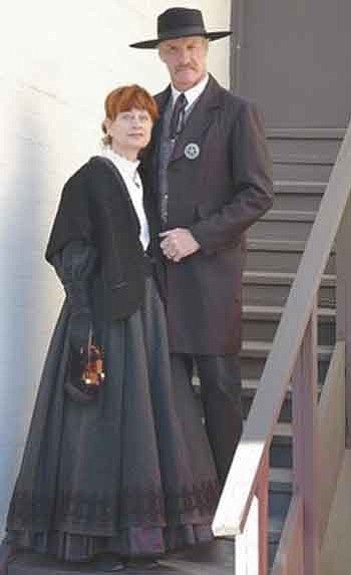 Terry and Wyatt Earp pose for a publicity shot in Tombstone.

PRESCOTT - Terry Earp is returning to the stage.

Doctors were initially pessimistic about the future of the Phoenix-based playwright, frequent Prescott performer and wife of Wyatt Earp, great-grand-nephew of the famous lawman, after an SUV struck her this past September and left her paralyzed.

Earp underwent seven surgeries at different Phoenix hospitals, moving in and out of intensive care within the first two months after the accident.

She since has made a substantial recovery, and plans to introduce her husband before Wyatt's performance of "Wyatt Earp: a Life on the Frontier" at The Palace Monday night.

Wyatt said his wife has displayed increased stamina and improvements, recently turning her left hand over and wiggling a toe on her left foot.

"These are all elements of progress. She felt her cat's tail brushing against her leg the other day," Wyatt said.

Her voice weak from a hole in her throat that doctors plan to cover on July 24, Earp commented on her recovery.

"I think I finally got my computer to where I can start working with my voice," she said, referring to voice-activated software.

Earp said doctors initially thought she would not be able to feel anything below her neck.

"I'm most impressed with being able to control one of my toes. That's a long ways down," she said.

Earp said she plans to start writing again and will perform "Mr. and Mrs. Wyatt Earp" at the Schieffelin Theater in Tombstone this next Nov. 16 and at The Palace on Dec. 1, 2008.

Terry and Wyatt were rehearsing "Mr. and Mrs. Wyatt Earp" around the time of the accident, Wyatt said.

Wyatt said the performance in Tombstone would be the first time they will be onstage together since the accident.

"I'm in her memories, she's remembering me, and she's railing against all the writers who made up so much stuff," he said of the story set with the wife of Wyatt Earp in 1938 recalling her husband's exploits.

Kathy Collins, Wyatt and Terry's manager with Arizona Entertainers, said she was surprised during one visit to look up at Terry to see her raising both of her arms.

"I don't really think that she is playing by their rules, she's just doing what she has to do to get better. I think she has the staying power and wherewithal she can make it happen," Collins said.