Days Past: The remarkable story of Solon Borglum 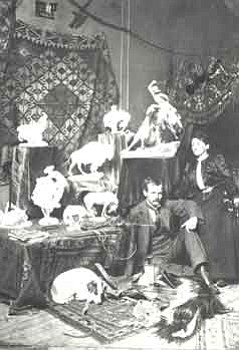 Courtesy/Sharlot Hall Museum Sculptor Solon H. Borglum and his aunt, surrounded by some of his sculptures, in Paris 1898.

If you don't recognize the name, Solon Borglum, consider this scene...

It's July 3, 1907. A parade with cavalry, a marching band, a troop of Rough Rider veterans, Civil War veterans, troops from Fort Whipple, the territorial governor, various prominent citizens and military officers, and the fire departments of Phoenix, Tucson and Prescott proceed to the courthouse plaza in Prescott. Seven thousand people witness the unveiling of the statue of Prescott's own Buckey O'Neill.

The monument is standing there today but technically it's not a statue of Buckey O'Neill. The statue is a tribute to the Rough Riders. You may ask, what is the connection? Was Buckey a Rough Rider? And who were the Rough Riders? Very briefly, O'Neill was a remarkable citizen of Prescott. O'Neill arrived in Prescott in 1882 and became a journalist, then a law clerk, then a lawman and finally the mayor of Prescott. He was mayor when the Spanish American War of 1898 broke out. Theodore Roosevelt became famous for leading the Rough Riders to the war where these soldiers from Arizona and New Mexico became heroes, as did Roosevelt. It was O'Neill who organized the local call for volunteers. The First Volunteer U.S. Cavalry became known as the Rough Riders. Teddy Roosevelt became famous and Buckey O'Neill died in battle at San Juan Hill.

The statue has been called the finest equestrian statue ever made. Certainly, Solon Borglum to the end of his days considered it his best work. So, who was Solon Berglum and how did he come to create this statue?

His story began, improbably enough, with the arrival of Mormon missionaries in Denmark in the 1800s. Among their converts were a young Dane, Jens Borglum and a young woman, Ida Mikkelsen. They married and emigrated to Salt Lake City in 1864. Ida's entire family had become Mormons. They followed and the next year, since plural marriages were then both legal and being advocated by the Mormons, Jens married Ida's younger sister, Christina as a second wife in 1865.

This proved disastrous and apparently destroyed the relationship between the two sisters. After three years, Jens and Christina divorced and all of them left the Mormon church. All of them moved away from Utah. Christina eventually remarried and dropped out of the picture.

Jens and Ida moved to St. Louis where Jens underwent a career change, acquired a medical degree and moved to Nebraska as a country doctor. It was on the prairies of Nebraska that his children were raised and their images of the world were formed.

For Christina left something behind - the two sons she had with Jens. The feelings must have been bitter indeed for her to leave her babies, or perhaps she saw that Jens and Ida would be good parents and her sons would have a better future with them than with her as a divorced single mother would not have been acceptable in the Victorian era. So, Ida and Jens raised her two sons, Gutzon and Solon, with their children who were both their half brothers and sisters and their first cousins.

Interestingly, all the children showed an interest in and a talent for art, but it was Gutzon and Solon who became world-renowned as geniuses.

At the age of 15, Gutzon knew what he wanted to do with his life. He wanted to be an artist. He left Nebraska for Los Angeles for art school. From there, he moved to Europe, became famous and eventually was responsible for the carving of the faces on Mount Rushmore.

His younger brother Solon also knew exactly what he wanted to do with his life. He wanted to be a rancher. He loved the life of the cowboy and plunged into it wholeheartedly as a teenager. He worked hard, and was succeeding as a rancher with a hobby of doing artwork when two things happened. First, there was the catastrophic Blizzard of 1886-1887. Actually, it was a series of blizzards that effectively wiped out the open range. Many ranchers lost half their herds. Soon after, Gutzon visited Salon and looked at his paintings and told him he should be an artist, not a rancher.

It took Solon three years to leave the lifestyle he loved and move to Los Angeles and study art. Here he went through the starving artist stage, living on oatmeal and picking up cash as a sidewalk artist. Even when he became successful enough to move to Europe, he had to work his way over on a cattle boat.

Paris was the goal of all artists in the 19th century. Naturally, that meant that upon arrival, most would imitate whatever was popular, twisting their talent to fit in. Solon displayed his rugged individualism in his first great work. He had dropped painting for sculpture and rather than doing something dull and imitative from the classics which other young sculptors were doing, he turned to his memories of the West and did an incredibly vibrant statue of a cowboy on horseback lassoing another horse. The title of the work was "Lassoing Wild Horses" and it made him famous, winning Place of Honor in 1898 at the Paris Salon and a silver medal in Argentina in 1910. Another artist commented to him, "Many young men go to art school and come out polished with nothing to say. You lived, you had something to say, then you began to think about art." (Quoted by Mervyn Davies in "Solon H. Borglum, A Man Who Stands Alone," page 41.)

He had now arrived and became famous as a sculptor, drawing on his past as a cowboy for themes. By 1901, he was awarded a silver medal at the Pan-American Exposition in New York for 12 bronzes and set up a studio in New York. In 1903, he was listed in Who's Who in America and in a book "The History of American Sculpture."

In 1905, he was commissioned to do an equestrian statue of a Civil War general, John Gordon, in Atlanta. This was completed and unveiled on May 25, 1907. While working on it, Solon heard that Prescott, Ariz., wanted to have a Captain William O'Neill Memorial, but only could pay $10,000. Although the fee was low for its day, Solon eagerly sought the commission, so he ended up working on both statues at the same time. The two were quite different for the Civil War statue is very well done and very formal, a quietly dignified general seated on a quietly dignified horse.

Solon clearly poured himself into the Rough Rider statue. As quoted by Davies from a newspaper account at the time, "Borglum himself was part of the land, the time that had ... drawn the men of the Rough Riders together to give their lives if need be for the freedom of a land and people far from their own Southwest ... And out of these fused fires came the greatest equestrian statue in the United States." (page 107).

That statue is considered to be his greatest achievement. When America entered the Great War, he asked if he could serve although he was exactly 50 years old. He ended up going to France and serving so well in a civilian capacity that he was awarded the Croix de Guerre medal.

When he returned from World War I, Salon again set upon his work as a sculptor, however he took on the difficult task of teaching his trade. While running his two studios, one in New York City and the other in Silvermine, N.Y., he established the School of American Sculpture in New York City, one of the first art schools devoted solely to American sculpture.

Like Days Past? Check out the complete archive of articles at www.Sharlot.org/dayspast HELP! We need your stories and experiences! The public is welcome to submit articles for Days Past consideration. Please contact Ryan Flahive at Sharlot Hall Museum at 445-3122 for more information.