Column: NFL Network means big bucks - for those who can see it 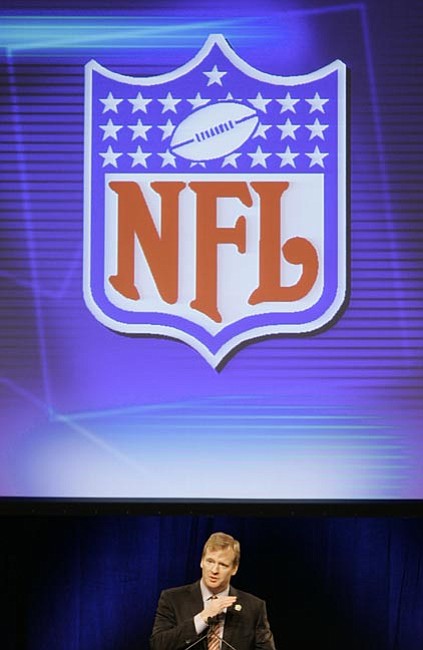 The Associated Press/<br>Alan Diaz<br>NFL Commissioner Roger Goodell is watching his league wage battle between its own network and the cable companies.

Originally Published: December 6, 2007 10:55 p.m.
Tweet
Forget the BCS. The biggest football matchup of the year is taking place off the gridiron.On one side are the NFL suits. On the other, the nation's largest cable companies, including Comcast and Time Warner, numbers one and two, respectively. If you're a student of sports business, this game of political pigskin is the most fascinating and entertaining battle of the year. At stake is annual revenue in the hundreds of millions of dollars.Essentially, the battle boils down to this. The NFL wants its 4-year-old brainchild - the NFL Network - placed on basic cable. The cable companies want to offer the Network as a premium sports channel. Each side's reasoning makes sense, at least to the party articulating the argument.As part of a basic package, the Network would be available in every home that has cable. If you're counting, that's nearly 96 million homes. At 70 cents per month per subscriber - the fee the NFL is demanding - the Network would generate approximately $800 million a year. But cable companies claim they will have difficulty raising rates to offset their cost to the NFL.A premium channel, on the other hand, would cost subscribers an additional $5-8 per month, but only die-hard fans would be willing to ante up. The revenue discrepancy between the two options is staggering. Offered as a premium channel, the Network would generate considerably more than 70 cents per subscriber. But the increased fee would be more than offset by a substantial reduction in the number of subscribers. Estimates vary, but history suggests it's unlikely that a premium channel would generate more than 10 percent of the revenue the Network would generate in a basic package.When the Network was first conceived, the intent was to provide football fanatics with 24/7 football news in the way of replays, re-runs, interviews and commentary. But the NFL soon realized there was one programming flaw that limited demand: The absence of live NFL games.So after existing contracts with the major networks - ABC/ESPN, CBS & FOX - expired, the NFL decided to reserve a slate of live games to be broadcast on their very own network. Those live games began airing during the second half of the 2006 season and generated little controversy. But this year, with a slate of eight games scheduled for the NFL Network, the battle has escalated.According to Nielsen Media Research, only 38.6 percent of households, including those with satellite TV, have access to the Network, leaving millions of fans frustrated and upset. Both sides in the dispute have attempted to enlist the disgruntled legions. The NFL's position - laughable, at best - is they are protecting the interest of the fan by trying to force the cable companies to offer the Network "for free." The cable companies accurately point out that the NFL created the issue by removing games from the "free" networks in the first place.This game of corporate chicken is nothing new. It's been played out before in different sports and different venues - e.g., the Yankees' YES Network in greater New York - and is currently being contested in the Midwest with The Big Ten Network. But the stakes are far greater in this instance.There are ways to resolve the dispute, but neither side has yet to accept the other's suggestions. The NFL refuses to arbitrate the issue and has asked Washington to intervene, a move that has the cable companies trembling. Another option, agreed to by Major League Baseball when it unveils its own channel in 2009, would give the cable companies a stake in the NFL Network, thereby providing an incentive to make the channel available in as many homes as possible. Thus far, the NFL is refusing to share the wealth.For the NFL, the game is entering the fourth quarter, at least for this season. The cable companies know that if they can weather the storm of criticism for another month, the issue will fade away, at least until the start of next season. For the fans, rooting for either side in this game is akin to hoping your Christmas stocking contains the root canal you've been putting off. You know it's going to hurt, regardless of the outcome.(Jordan Kobritz is a former attorney, CPA, and Minor League Baseball team owner. He is an Assistant Professor of Sport Management at Eastern New Mexico University and teaches the Business of Sports at the University of Wyoming. Jordan can be reached at jkobritz@mindspring.com)
Report a Typo Contact
Sign up for Courier e-News Alerts
Most Read
7 days
30 days