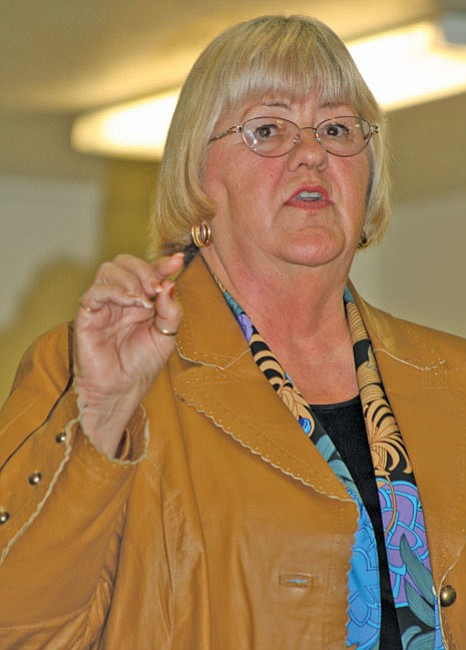 Local resident and town council member, Gloria Moore, comments during a public meeting at the Chino Valley Senior Center on Nov. 27 on the proposed airpark. Will Waterman/Review

Citing concerns about noise and dropping property values, some homeowners who live in Chino Valley and northeast of the town limits on county land remain wary of a landowner's desire to build a private airpark off Perkinsville Road.

During a neighborhood meeting Nov. 27 at the Senior Center, the "Coalition for the Future of Greater Chino Valley," a group formed in opposition to landowner Tom Perkins Sr.'s proposal, outlined arguments against Michael A. Perkins Airpark.

In January, Perkins filed a request with the town's Development Services Department to rezone and develop 1,100 residentially zoned acres of his 8,300-acre ranch for an airpark 8 miles east of Highway 89 off Perkinsville Road.

Perkins wants industrial zoning on the land, located east of the Granite Creek floodplain and near the Verde River headwaters. He also has applied for a conditional use permit.

Within the first five years of development, the airpark would feature 20 hangars and a 4,500-foot by 75-foot runway with a capacity of 12,500 pounds or less. The runway would include one parallel taxiway for public use during daylight hours. The airpark also might have retail areas with a restaurant.

However, the project's plans over the ensuing 15 years allow for building more hangars, office space and businesses around the complex. In addition, Perkins could extend the length of the runway and taxiway to 7,500 feet.

On Jan. 17, the Chino Valley Planning and Zoning Commission will consider whether to recommend that the town council approve the airpark, which would accommodate small single- and twin-engine planes but no commercial airline traffic.

Up to this point, Chino Valley councilmember Gloria Moore said the council has not examined the issue.

"We need to know the town's concerns first," she told the audience. "This is not a done deal. When it comes to the Planning and Zoning Commission, you all will have an opportunity to be heard."

Four months after Shelly McTee, an attorney with the Gallagher & Kennedy law firm who represents Perkins Ranch Inc., announced Perkins' plans, more than 100 people showed up for Tuesday's meeting to learn more about the proposal and ask questions of local attorney and event moderator Gil Shaw.

Fetter said an airpark would create urban sprawl in Chino Valley, transforming it into a place similar to north Phoenix.

"We do have a stake in this," Fetter told the audience. "In the next year, Chino Valley will reach a tipping point. We could have an airpark with a lot of urban development, or not."

The coalition argues that the airpark would rest too close to the airspace of Prescott's Ernest A. Love Field, which is 8.5 miles away from the site, and cause safety problems.

"The FAA issued us a letter that says as long as we don't set up anything in particular that conflicts with their airspace, there aren't any safety issues with having an airpark there," said David Ward, another attorney with Gallagher & Kennedy.

Fetter added that the noise levels for the aircraft flying in and out of the airpark would range from 60 to 85 decibels.

"People start to complain about noise at 50 to 55 decibels," he said. "The FAA says that noise levels at 65 decibels and above are incompatible with residential land uses."

Ward said airpark designers will work with the town to delve into the potential for noise and ensure environmental safeguards.

"These are real site specific development issues that every project has to deal with, and they'll all get dealt with," he said. "There's a misunderstanding of what the noise levels are going to be. In comparison to Prescott's airport, it has about 650 takeoffs or landings per day. We would have about 30 initially and about 80 when it's fully built out."

Over that period, McTee says Chino Valley could gain as many as 5,000 jobs and $25 million in gross economic benefit.