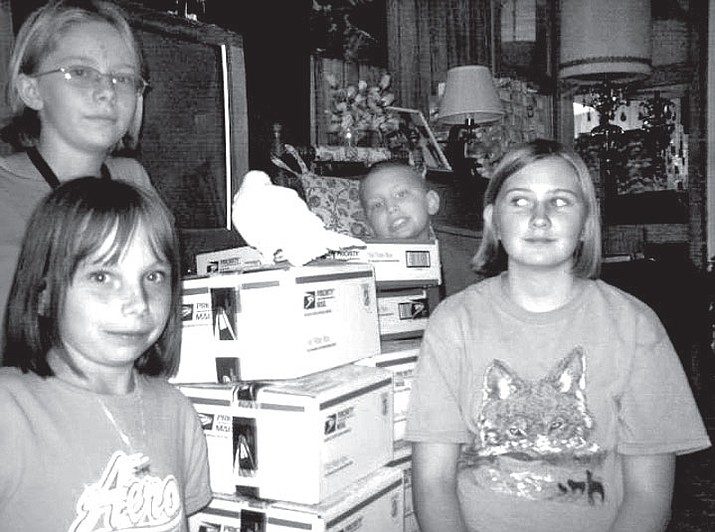 It took less than three months for the Lonesome Valley Wranglers 4-H Club to collect enough donated items to fill 21 boxes and mail the early Christmas presents to troops stationed in Afghanistan.

"We started the 4-H project in September and wanted to mail the boxes in time for the troops to get them before Christmas," said , 4-H Food Group project leader. "We did not know we would get that many boxes worth of things to send so quickly.

"We picked troops in Afghanistan because the troops in Iraq can get everything they need right there at the bases.

"But the soldiers in Afghanistan that we sent our care packages to are living in the field. They are about five hours away from the nearest base.

"They have generators to run electricity, but they can't even buy a soda pop where they are. When we decided to send care packages to troops overseas, we asked , the commander of American Legion Post 122 in Cordes Lakes, to help us.

"He put me in contact with 'Al,' the command sergeant major of a unit in Afghanistan."

For security reasons, Myers said "Al" does not want his real name used.

"Al said he has several camps of soldiers out in the field and that they could use anything that we send. So, the 4-H kids started collecting donations. We had a chili cook-off in Cleator and raised about $250 for postage.

"Diane Wortman, owner of Diane's Hair Hut in Cordes Lakes, helped us a lot. She held fundraisers, like a bike run and a barbecue, and let us use her shop for a drop-off for donations and storage."

Members of Post 122 and their wives have been sending care packages to troops overseas for more than a year.

Myers said 'Al' is from Phoenix.

"We were going to try to send our packages to troops that are from Arizona," she said. "But Ron said, 'Why? It doesn't matter where they are from because they are all doing the same job over there.'"

Myers said the project was a positive and uplifting experience for her and the 4-H members.

"We are already talking about doing it again next year," she said. "Probably in the spring. So watch for us when we start doing our fundraisers."

Al e-mailed Myers the letter below.

"I don't know where you find the energy and time to do all this work for the military members serving overseas - but we thank you profusely for your efforts to make our deployments a little easier.

"Unfortunately, you will never truly know how much each soldier looks forward to your 'goody' boxes, and you will never see the excitement and joy on their faces as they open each box. It's like Christmas with little kids.

"Words cannot describe how much we appreciate you. Tell all the "Patriots" thank you for their support to the troops.