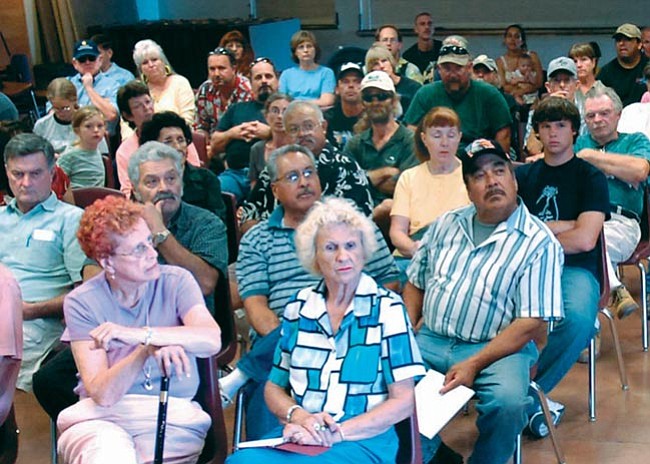 The Daily Courier/Jo. L. Keener Residents of the Vallejo Drive neighborhood wasted no time in activating a block watch program. One day after listening to Prescott police officials discuss ways they can protect their neighborhood from crime, residents called police to report a possible burglary in progress on First Street. Officers later found and arrested the suspect on Lincoln Street.

PRESCOTT - Only a day after 70 residents from the Vallejo Street area met to take back their community, police arrested a burglary suspect after two residents called in suspicious activity.

Around 12:30 a.m. Thursday, police arrested 18-year-old Samuel J. Reyes and booked him into Yavapai County Jail on two counts of third-degree burglary, two counts of possession of drug paraphernalia, one count of criminal trespassing, and one count of minor consumption of alcohol.

Officials said a resident called Prescott Police at 11 p.m. to the 500 block of First Street about a possible burglary in progress. The caller said a man appeared to be breaking into a neighbor's vehicle. However, police said the suspect fled before they arrived.

Police received another call from a resident on Lincoln Street at 12:20 a.m., reporting another possible burglary in progress. The caller said a man was walking around the neighborhood, looking in windows, and had gone into a garage. When police arrived, they found the owner of the garage and a neighbor detaining Reyes.

After further investigation, police said Reyes was the same person who allegedly burglarized the vehicle on First Street. Prescott Police Lt. Ken Morley said after officials took Reyes to the Camp Verde Jail, he did admit involvement in the burglaries.

At the time of arrest, Morley said police found women's earrings, a portable CD player with an adapter for a vehicle, three $100 bills, and $19.08 in coins on Reyes.

"We are extremely pleased with how the neighborhood handled that (incident). Watching out for each other is the best deterrent of crime," Morley said.

An Aug. 21 article in the Daily Courier told how residents along Vallejo Street in Prescott regularly feared for their safety, especially after an assault and gunfire incident brought them cautiously together. Other streets in the problem area include Madison Avenue, First Street, Meany Street, Sonora Drive and Lincoln Street.

However, Thursday's arrest brought hope to people living in these areas.

"I don't want crime in my neighborhood and I'm glad the neighborhood is stepping up," one resident said about the phone calls leading to Reyes' arrest.

"I think that's great, actually. It gives me faith in my neighbors that they're looking out," another resident said.

Morley emphasized he does not recommend citizens detain suspects on their own, but rather, call the police immediately and be careful.

"We're hoping the feeling of neighborhood was conveyed in (Tuesday's meeting at Dexter), and that's what happened here," Morley said.