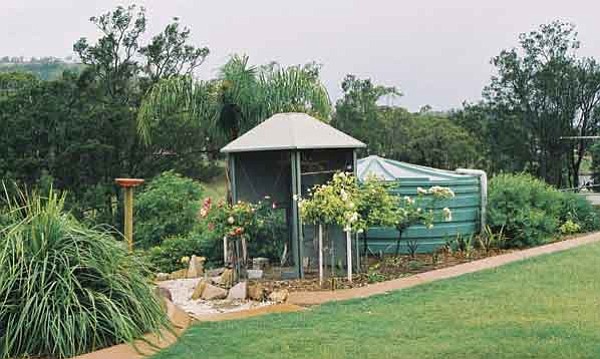 Rainwater catchment tanks, such as this one in Australia, represents an alternative water source for homeowners other than the precious resource of groundwater.

CHINO VALLEY - With the American West in the throes of a drought, municipalities are looking for ways to conserve groundwater.

As the population grows and groundwater from wells declines, alternative methods for obtaining a precious resource become a hot commodity.

Over the past few weeks, Chino Valley officials have been investigating the practicality of rainwater catchment - an ancient, yet revolutionary idea - in their community.

Essentially, homeowners could store rainwater from monsoon thunderstorms and from melted snow in thousand-plus gallon tanks for present and future use.

Homeowners could use stormwater as an alternative to xeriscape landscaping. In addition, they could wash their clothes and cars, and fill their toilets with it.

"This is a real unique opportunity to allow Chino Valley to start setting some pretty interesting standards on how to at least maximize and stretch as far as physically possible the amount of water we use in the home itself," Chino Valley Town Engineer Ron Grittman said.

Representatives from Bushman, a company that manufactures residential rainwater catchment tanks and accessories, have been pitching the benefits of their systems to Arizona cities and towns that receive moderate annual rainfall totals.

Arizona's mid-altitude cities and towns, such as Chino Valley, Prescott, Prescott Valley, Globe, Safford, Bisbee and Douglas, stand to benefit most from these aboveground and underground tanks.

"Most of it runs off to the washes and the river systems, eventually into the Verde (River) and down into the Phoenix area to be consumed by our downstream users," he said. "In order for us to benefit from that water, we need to intercept it. By having rainwater harvesting systems, we could intercept that water before it reaches streams, channels, rivers or washes."

The Temecula, Calif.,-based Channell Commercial Corporation, which bought Bushman Tanks, an Australian company, in 2004, is bringing its rainwater catchment technology to the United States in September.

Nick Morganti, operations and finance director for Channell, said that this past year his company sold more than 40,000 rainwater storage tanks in Australia, a continent ravaged by drought.

Bushman's business in Australia began in rural areas. However, because of water shortages and restrictions, major Australian cities began scrambling for the technology.

Grittman said his focus for Chino Valley from an engineering standpoint would be to retrieve stormwater off the town's roadways, clean the water with storm septors, put it in storage tanks and eventually use it for landscaping next to select roads.

Also, when a housing subdivision goes in, for example, developers could install 5,000-gallon storage tanks all along the rights-of-way, in addition to standard drainage systems, to catch stormwater and reduce runoff.

"The size of the tank is going to be a function of the density of the plants and what is the longest dry period we need to span," he said. "On any given storm, we may have some tanks more full than the others. But at the end of the season we have an overall community that has relatively full tanks to water the landscaping with."

Before town officials develop a system for rainwater catchment, however, they must write standards, get products specified and perform pilot projects.

"I see it as a very viable alternative," Grittman said. "We get enough rain here that we should easily be able to provide thick, lush landscaping that can be sustained off of these tanks through primarily the dry periods of April, May and June."

Grittman added that once the town gets the concept off the ground and communities and developers accept the idea, stormwater, rather than groundwater, might become an alternative source for fire suppression.

The City of Prescott also is showing interest in rainwater catchment.

Rain catchment a way to conserve groundwater
Letter: Rain catchment method not an alternative
Letter: There is no alternative to xeriscaping
Letters to the Editor in the 9-26-07 issue:
Viewpoint: Town water director promotes renewable water supplies the public can use