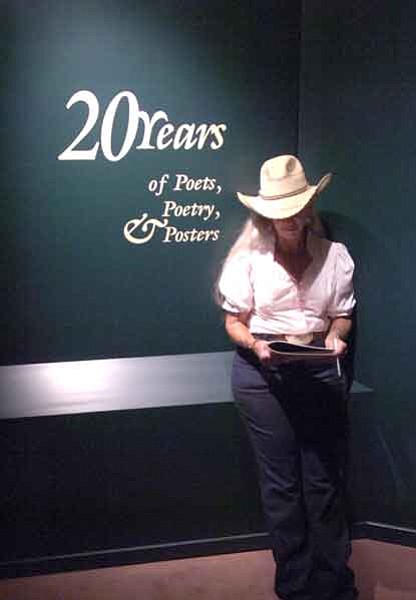 PRESCOTT - For cowboy poets and musicians, Prescott's annual summer gathering is more than a celebration of their way of life - it's a family reunion.

Crowds filled the Sharlot Hall Museum grounds Friday, the first full day of events of the 20th annual Arizona Cowboy Poets Gathering, sharing in the experience of poets and musicians all telling stories of ranch life and the cowboy way.

"I love this gathering. The heritage is so rich with this one. We feel like everyone is part of our family," said Jean Prescott - yes, that's her real name - a touring songwriter from Ovalo, Texas, performing with her husband, Gary.

Jean opened the first hour of music in the amphitheater, leading the crowd in yodeling sing-a longs such as "Roy's Little Darlin," about her girlhood crush on Roy Rogers.

Gary, who has his own catalogue of songs about life growing up on a ranch in southeast Texas, appeared to enjoy a song by his peers, Roughstring, a four piece group sharing in three-part harmony on the song "Navajo Rug."

"The only thing about playing is you don't get a chance to hear your friends play (very often)," he said.

For Jim Dunham, a local musician who has played traditional 100-year-old cowboy songs at gatherings around the country, said the Prescott gathering is one of his top three favorites. "After a few years of this,

everybody gets to know everybody," he said.

Dunham performed a lighthearted set with his sister, cowboy singer, poet and songwriter Suzi Kilman, both of whom played guitars while humorously goading each other.

"She told me my mind was like a camera with no film. I told her it was digital," he said mid-set.

While musicians perform outdoors, poetry and storytelling sessions are continuously scheduled in buildings on the museum grounds and in two halls across the street at the United Methodist Church.

In an open session in the Ranch House Friday, poets recited classic poetry and original works.

Gail Gardner Award winners Gail Steiger, Georgie Sicking and Steve Lindsey recited original material. Sicking recalled an irksome experience in which a banker called her a "housewife," and Lindsey told the story of an 80-year-old cow-puncher's showdown with the devil in Hell.

"There's lots of talent here. It's a good way to get out and enjoy the afternoon," said Helen Bradshaw of Prescott, adding that she and her husband Brad have attended the past six or seven years.

"We don't miss it unless we have to," Brad said.

The 20th annual Arizona Cowboy Poets Gathering continues Saturday from 9 a.m. to 4 p.m. at Sharlot Hall Museum with special performances at the Elks Opera House from 11 a.m. to 4 p.m. and at Yavapai College Performance Hall at 5 p.m.