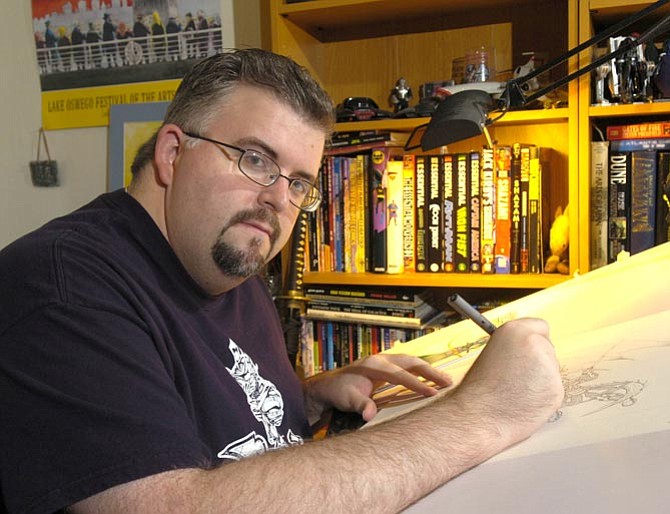 Artist Dave Beaty, 34, delves into this post-apocalypse world in his comic book series, "Bushi Tales," when he's not working on a graphics project at the Courier, like Captain Value or an illlustrated Scene cover.

Beaty and partner Lin Workman reached a milestone with the project recently, getting picked up by distributor Diamond Comics.

Beaty said his earliest memories of comic book fantasy are of his grandfather reading him selections he had received in WWII care packages.

Beaty had walked into a shop wanting to use the phone to call about a job selling perfume, he recalled.

One of the owners, who knew Beaty was an artist, overheard his phone conversation and asked him if he noticed the Help Wanted sign on the door.

Beaty met several artists on the job, like Marvel Comics illustrator Scott Clark, who offered him some spot work drawing backgrounds for "Guardians of the Galaxy," as a ghost artist, then "Alpha Flight."

Beaty credits Foust and Clark as influencing his direction as an artist.

At that stage in my career, those guys were definitely my two biggest influences because they were right there showing me how to do things, and pointing things out," he said, adding that he had the advantage of working as an artist while honing his style at the same time.

"It was one of those things - Lin wanted to do his own thing; he wanted to do these kits. I kind of had this idea where I didn't think it was that big of a deal to do this. Had I known how much time and work, money and effort, sweat, tears and blood and everything else went into this... I still probably would have done it anyway," Beaty said.

"It's proven to be a lot more than I ever expected."

Beaty said the most absorbing aspect of producing the book is promotion: traveling to industry shows, writing and sending press releases and follow-ups, sponsoring podcasts, coming up with retailer incentives, and now, with new distribution, writing copy for catalogs.

Beaty, who wrote the script for "Bushi Tales," and Workman released the first comic in April of 2006.

Beaty and Lin worked up exposure of the book by traveling to as many shows as possible and hitting shops along the way.

"Through a bizarre set of circumstances, enough retailers, and apparently some publishers, were asking Diamond about this book," Beaty, said.

"For us, it's such an incredible the opportunity, because it's the first time we can present the book in a really big way, nationally," he said.

Beaty said the re-release of the first book allows him some reediting advantages that offers an improved version, fixing "five or six things that were driving me nuts" since its first release.

As far as the series storyline, Beaty said he knows how the tale will end, but the course of events can change depending on the character development.

"At some point, some of the characters might be more intelligent than the outline suggests. We may have this trap planned, and I'll be writing the story, and it's time for them to walk into the trap, and Akiyo, the leader, is to too smart for that, and you know that. You know that if she says one thing and they walk into the trap, then you've been untrue to the characters because she'd never fall for that. So then things kind of change, and a different situation evolves. It can change through the course of events, but the main beats of the story are always going to be the same because there are certain developmental things that are going to happen at a certain point," he said.

An added boost to the "Bushi Tales" saga is that the creators discovered they were two votes away from being one of five nominees of the Russ Manning Award given to most promising new artist at July's Comic-Con convention in San Diego, the industry's biggest show.

Beaty said they are halfway through working on the third issue of "Bushi Tales" and are shooting to release it in January.