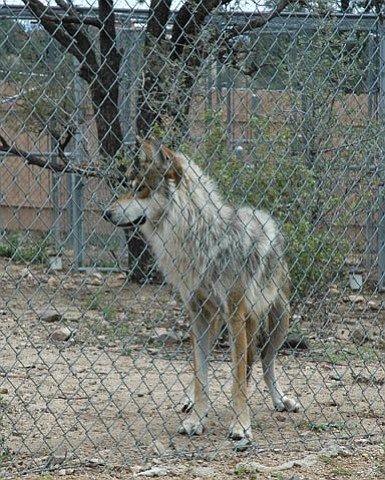 The Daily Courier/Sam Lifshutz --- The Heritage Park Zoo currently cares for multiple Mexican Gray Wolves. Eventually, if state and governmental agencies agree that the wolves are fit for the wild, they will release them in the forests of eastern Arizona and western New Mexico.

The Mexican Gray Wolf is the rarest, southernmost-ranging, most genetically diverse subspecies of the North American Gray Wolf.

Biologists consider it critically endangered. Currently, only about 340 Mexican Gray wolves exist worldwide, the majority of which have been born in zoos and sanctuaries in the United States and Mexico.

The Mexican Gray Wolf population first became threatened in the early 1900s. Over-hunting of deer and elk by humans reduced the numbers of these animals, the main food source for the wolves. This, coupled with high cattle stocking rates, occasionally led to the Mexican Grays preying on livestock.

"These predators were considered a threat. There was a lot of pressure on the government from ranchers," explains Susanna Koenig, animal curator at the Heritage Park Zoological Sanctuary.

To reduce the fear of wolves damaging livestock, the federal government implemented an aggressive predator control program. It was so successful that by the mid 1900s, it had completely eradicated Mexican Grays in the U.S. and severely reduced them in Mexico.

Finally, in the late 1970s and early 1980s, the U.S. and Mexico formed a joint effort to restore this species.

"The last five that were known to exist in the world were captured to establish a captive breeding population," says Koenig.

The Fish and Wildlife Service (FWS) and Association of Zoos and Aquariums (AZA) currently manage that population. Captive Mexican Gray Wolves now live in 48 zoos and sanctuaries throughout the U.S. and Mexico.

The Heritage Park Zoological Sanctuary is among those 48. Koenig runs the program for the zoo, and represents it at yearly meetings for the organization.

Koenig stresses, "It's extremely important that their genetics be diverse to keep a healthy wolf population. The breeding is very carefully managed and pairs are selected based on their genetics."

A system called mean kinship ranks how much any given wolf is related to all other members of the population. "Those that have the least relation to the other wolves are ranked higher as candidates for breeding," Koenig points out.

Keepers evaluate the wolves for release into the wild based on their genetic makeup, reproductive performance, and behavioral criteria.

They must demonstrate proven parental skill and appropriate social behavior as well as an aversion to humans. Zookeepers are careful to avoid contact with the wolves unless absolutely necessary.

Koenig says, "We keep a hands-off policy so that the wolves remain as wild as possible."

The wolf rehabilitation program has been the subject of controversy because farmers and ranchers decry the release of these animals into the wild.

"That ranching land has been without wolves for a long time. So the ranchers that have been living and working that land for generations are seeing wolves introduced into these lands where they have free ranging cattle, and consider these wolves a threat to their livestock," Koenig explains, "We work with the ranchers to hear the citizens' and locals' feedback on how it's affecting their livelihoods."

Although the release of wolves has led to some livestock destruction, ranchers receive monetary compensation for their losses.

Proponents of the rehabilitation program argue that wolves play an important part in the ecosystem that other predators don't. Wolves hunt by coursing, or chasing their prey.

"They're adept at identifying weak or injured animals," Koenig says. She believes this keeps prey populations strong by eliminating the very young or old, sick or injured.

Koenig is extremely enthusiastic about the rehabilitation program.

"They [the wolves] remain my love and my passion," she says. "I feel so strongly about this program and what we're trying to do here. We are such a small facility, and I consider our participation in this program as quite a jewel for us. It's a shining star for us to be able to help restore a critically endangered species back into the wild. I absolutely love it. I can't think of anything more rewarding in this field."

Currently, Mexico is assessing various sites for the reintroduction of the Mexican Gray within its borders, and is considering a physical connector with the Blue Range area.

"That would recreate the original range of the wolf," points out Koenig.

So far, captive raised wolves have survived and reproduced successfully in the wild, a good first step toward the reemergence of a healthy wolf population. However, despite these efforts, the Mexican Gray Wolf remains one of the rarest land mammals on the planet.

The five wolves at Heritage Park - Gray, Rocky, Swift, Jester and Hahtqwilla - are all 2-year-old males. Visitors can see them any time during zoo hours, which vary by season. The zoo also will play host to a variety of events for National Wolf Awareness Week, which begins Saturday, Oct. 13.