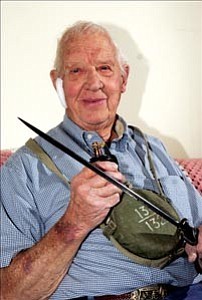 Gail Peoples spent her whole life never knowing that her father fought at the historic Battle of Iwo Jima in World War II ­ until a few years ago.

"I was married before it even surfaced," she said. "It was pretty profound and pretty moving for me (to find out)."

At only 20 years old, Prescott resident Raymond Griffith, nov 81, served in the Headquarters Company of the 4th Marine Division, working the field telephone at the famous Japanese island. Not only did this veteran spend about a month on Iwo Jima, but he witnessed the historic flag-raising ceremony at the top of Mount Suribachi ­ the event that won photographer Joe Rosenthal a Pulitzer Prize.

"I think it was the second flag that I witnessed," Griffith recalled. "For some reason, him (another Marine) and I was standing there and we looked up at Suribachi."

He didn't think anything of it at the time. "When I seen the photo, I said I was there when it was taken. I know the American public really went wild about it."

Griffith arrived at Iwo Jima on Feb. 19, 1945, and didn't leave until March 16. He remembers showing up on the main ship, dressed in his gear, and watching the U.S. forces bombard the island. After he boarded the landing craft, his unit had to abort going ashore. Griffith said they cruised around on the craft all night before pulling onto land the next day.

By that time, U.S. forces had secured the area and Griffith set up his command post to work the communications. Along with two others, he lived in a foxhole.

"We had a job to do and that's all we did," he said. "We could hear all the rifles and machine guns."

Luckily, Griffith didn't have to engage in any hand-to-hand combat. However, the Japanese did shell his area, especially at night.

"We never had no feelings about it. The saying was, as long as you hear it flying through the air, you're all right. The ones you can't hear are the ones to be careful of," he said.

Peoples is very proud of her father and said she's just thankful God brought him back alive. She said her dad never boasts about his historic encounters. He never even talked about the war when she was growing up.

"At the time, people just didn't wallow in self-pity," she said.

Looking back, Griffith said people did not realize how important the Battle of Iwo Jima would become. He doesn't consider his actions great; rather, he just did what he had to.

"The people who're on Iwo Jima nobody really thought it was the thing it actually was. I think it was the 50th anniversary of the landing that we (Griffith and his wife) even thought of attending a reunion," he said.

Regardless, both Griffith and his daughter still get emotional when talking about the war. When asked of his overall view on the now-historic battle, Griffith merely rested his chin in his hand, his eyes welling with tears.

He said nothing, perhaps his strongest statement of all.