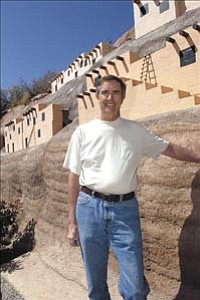 Wayne Cramer poses underneath his replicas of Indian Pueblos Wednesday at his Prescott home. The Pueblo¹s are designed as part of an erosion control project at the rear of his Cliff Rose home. Cramer has created a wall with cement and the decorative Pueblos to stop erosion at the back of his home. Courier/Jo. L. Keener

Cramer built six miniature pueblos and covered the hillside behind his home in the Cliff Rose area to prevent soil erosion.

While unique, Cramer said it is important to remember that the concrete pueblos serve a function‹protecting his residence.

Cramer and his wife Linda made several trips to Prescott before moving here in December 2000. They admired the way residents built their homes into the hillsides.

The couple was not concerned when they moved into their new home because an eight-foot block wall protected the house. The 28-foot cut into the hillside was colorful and 10-feet behind the retaining wall.

Cramer did not consider the effect Prescott winds could have on a hillside, especially when combined with unstable soil.

"Within the first year of residence in our new home, erosion had filled roughly 40 percent of the space between our retaining wall and the cut in the hill. It did not take much arithmetic to figure out that with no further work, we would have erosion over the retaining wall and into our backyard within another couple of years," Cramer.

In the fall of 2002, he began working on a project that would take him three years to complete. Cramer decided a new retaining wall directly on the hillside could be functional as well as reflect a bit of Arizona history, and Pueblo No. 1 was born.

Pueblo No. 1 was actually a small retaining wall and stood through the winter of 2002-03. The pueblo did what it was supposed to, but the rest of the hill continued to erode. Cramer realized the pueblo would tumble down if he did not prevent further erosion.

"During the summer of 2003, I developed a method for covering the exposed hillside with colored concrete. This method incorporated rebar, chicken wire, landscape fabric and lots of concrete," he said.

Cramer created the facing on the hillside by driving stakes into the hillside, applying landscape fabric and adding a rebar grid. He covered the grid in chicken wire and then applied the concrete. Cramer colored the concrete to mimic the natural striation of the hillside.

The erosion of the hillside created a ledge where Cramer placed additional pueblos. He completed the work one panel at a time. Each panel was about 18-feet wide and more than 20 feet high.

In 2004, Cramer had covered 75 percent of the hillside and added three more pueblos. By the time 2005 arrived, the end was in sight.

However, erosion on the remaining exposed hillside required another solution. Cramer added bricks to the concrete covering the hillside and created a small, distinctive retaining wall where he built his final pueblo.

Cramer constructed each of the six pueblos from brick. After placing the brick, he would install rebar and fill them with cement.

Cramer added large planters at the base of the hill and planted greenery on the hill to further enhance the view and aid in erosion control.

Each step of the project was hand completed. In addition to the cement, Cramer used 1,350 concrete blocks, 140 feet of rebar, 40 steel T-posts and 300 feet of chicken wire.

"I did this because it had to be done. It turned into art and a conversation piece," Cramer said.

Best rock designs for Arizona landscapes
Letter: Who is really to blame for Lowe's wall?
Builders use, re-use, re-cycle in new structure
Dirt flows away from Lowe's and toward subdivision
Backyard Gardener: Using stone walls to enhance the look of your property
Event Calendar