Trusting the future to God 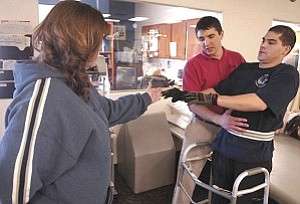 Courier/Les Stukenberg Jeremiah Jorgensen helps Prescott Police Officer Robb Martin maneuver around the therapy room at one of his physical therapy sessions at the Center for Physical Excellence in Prescott. Martin uses the wheel walker and knee-ankle-foot orthoses to put weight on his joints and bones for short periods of time to try to help keep them healthy.

And if he must spend the rest of his life in a wheelchair, Martin said, he will have to figure out what other career would excite him as much as the police work has over the past three years.

"I really want to go back to full duty, but obviously I have to walk to do that," said Martin, who set his eyes on the law enforcement field as a kid. "I did everything I could to become one (an officer). Prior to this injury I was exactly where I wanted to be."

At this point, Martin has no feeling from his chest down because of a spinal cord injury he suffered on Dec. 18, 2005, in a quad (all-terrain vehicle) accident in the sand dunes near Yuma.

Riding behind a couple of his friends, also Prescott Police Department (PPD) officers, Martin came up on a one-foot berm of sand. Within seconds, he found himself flying off the quad and landing face first in the sand while his legs flew up over his back.

"When I flipped over, I felt a pinch in my back and the wind was knocked out of me, so I was trying to regain my breath," Martin said. "Once I started breathing again, I went to get up and I couldn't Š I told the guys that I couldn't feel anything."

Emergency personnel airlifted Martin to a Yuma hospital, and from there, to St. Joseph's Hospital and Medical Center in Phoenix where he remained until Feb. 1.

Doctors discovered that Martin's spinal cord was "pinched" and not "severed" at T-7 and that his neck broke at the C-6 vertebrae, Martin said.

"The doctor gave me a two-year window that I might be able to walk," he said.

Meanwhile, Martin has to re-learn things that once seemed so simple to accomplish while standing.

"We are still learning different things and how to get around," Martin said. "The bathroom care was the hardest to get used to."

Turning in bed, for example, is a task that requires help from his wife Lisa, who works for the PPD community service division. Lisa has been off work since the accident ­ thanks to the City of Prescott employees who donated hours of sick leave to help the family during Martin's recovery.

Being a professional motorcycle racer, Martin said, his predicament didn't shock him because "I've always thought of the possibility of that happening."

Four years ago, during a race he broke his back and a collarbone but fully recovered, Martin said.

Unlike Martin, his wife Lisa admits she was in shock for some time.

"I just kept expecting him to get up," she said. " The only reason I was able to get through this is because he is so strong Š I just followed his lead. And I'm surprised he took it so well as he did."

Since the accident, the law enforcement community and the public in general responded by organizing several fundraisers to benefit the Martins, who are raising three teen-agers ­ Machelle, 18, Rebecca, 16, and David, 13.

Lisa described the community's response as incredible, while noting that the family already received $20,000 with two raffles still pending.

During a recent event, Prescott Police officers and Northern Arizona Regional Training Academy recruits, who waited tables at Red Robin, netted $14,000 in tips and the money from a raffle for the family. Martin said that people waited an hour-and-a-half to get a table.

Lisa added, "I've never thought it (the response) would get that big," she said.

To give back something to the community, Martin plans to participate in the law enforcement torch run in early May that benefits the Special Olympics. His race preparations will begin after removal of his chest brace on March 22, which has kept him upright to allow his spine to heal.

Regardless of the final outcome, Martin said he looks at his life as a glass half full and not half empty.

"It makes me stay positive to look at what I still have instead of what I don't have," Martin said.

Lisa added with tears in her eyes as Martin embraced her, "Every day that he has he lives at 100 percent. No matter what, he will do his best to keep going."