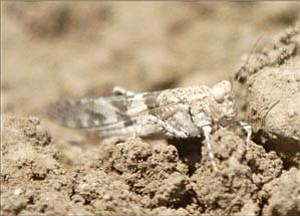 Grasshoppers and other insects are in a feeding frenzy in the tri-city area, ravaging gardens and crops, Master Gardeners and other experts said.

Homeowners complain that grasshoppers are "inundating their yards," said Mike Fraker, president of Patriot Pest & Termite Control of Prescott. "I think they are usually a seasonal situation. They are alarming to people. It seems to be (occurring) more in the Chino Valley area than anywhere else."

This season appears to favor grasshopper populations, said Bill Cart, a Master Gardener (a university-trained volunteer who serves as an community educator) for the University of Arizona Cooperative Extension office in Prescott.

"I don't know all the reasons other than temperature and moisture levels," Cart said.

Cart said that a correlation appears to exist between populations of grasshoppers and blister beetles, which produce larvae that feed on grasshopper eggs in the soil.

The beetles multiply, but they lay fewer eggs and die off when they run out of food, he said.

When the beetles die off, grasshopper populations rebound, Lain said.

Grasshoppers feed on flowers, a variety of grasses and shrubs such as burning bush and Eastern snowball bush, Lain said.

They also like to eat the leaves of crops, said Shanti Rade, an organic farmer in Paulden and Chino Valley.

"They will demolish it to where the crop will not survive," Rade said.

While blister beetles control grasshopper populations, they are not beneficial insects, Cart said.

The beetles fly around and like to eat certain plants, Lain said.

"They love most of the trees," he said. "They like to eat potatoes, peppers, those kinds of things."

Blister beetles also are toxic to livestock such as horses, said Greg Flippen, who co-owns Yavapai Exterminating in Prescott with wife, Nancy. A horse might accidentally devour a blister beetle while chewing alfalfa laden with the beetles, which seek moisture.

Other garden pests include snails and slugs, Lain said. They make holes the size of dimes in foliage and flowers.

However, grasshoppers by far do the most damage to crops, Rade said.

Rade said that she applies a spore bait to control grasshoppers while sparing beneficial insects such as lady beetles and butterflies.

"You spread it out, and the grasshoppers eat it, and they die," she said. "Once the first one dies, the next ones come along and eat the dead ones."

The cannibalistic grasshoppers in turn get sick and die from exposure to the spores, she said.

Spores and bacillus affect the digestion and reproduction of the grasshoppers, Flippen said.

Flippen said that he prefers biological controls for grasshoppers because they carry a longer-term effect.

However, Flippen said it is difficult to control grasshoppers on one property while they swarm on adjoining properties.

"You are affecting a postage stamp-size area in a gymnasium," he said. "You can only promise or deliver realistic solutions" that may last only a few days.

Another biological control for grasshoppers is oil derived from the neem tree, according to Cart. He said neem oil acts like Malathion, a pesticide

Lain said Sevin garden spray is one of the best controls for blister beetles. The beetles die from eating foliage treated with the spray.

He recommends snail and slug baits to rid gardens of those pests.

"You sprinkle (bait) over the garden area," Lain said. "They will be attracted to the bait, digest it and die."

Lain said homeowners should do regular maintenance work on their gardens to check for pests.

"If they find a problem and don't know what it is, they should bring the sample to a nursery," he said.