Area firefighters are battling two fires in the Prescott area 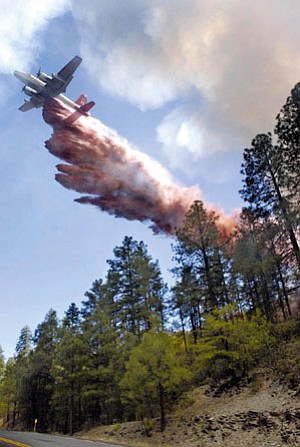 Prescott - June 1, 2006 Courier/Les Stukenberg Heavy Air Tanker No. 11 drops a load of retardant at the Green Fire near Walker, east of Prescott Thursday.

One, the Green Fire, started at about 1 p.m. Thursday, approximately three miles south of Lynx Lake off Smith Ravine Road, which is southeast of Prescott.

The cause is under investigation, burning in Ponderosa pine. As of Thursday afternoon, it had consumed about 20 acres with no containment estimate, authorities said.

No structures are threatened, said Debbie Maneely, spokesperson for the Forest Service.

She added that authorities have closed the Lynx Lake South Shore and Lynx Lake for the safety of the firefighters and the public, and no evacuations have occurred.

The second fire, which was reported at about the same time as the Green Fire, was burning about two acres off Iron Springs Road, west to southwest of the Beverly Gardens Trailer Park. Authorities said it is under control and no structures are threatened.

• Campfires, charcoal grills, and stove fires are prohibited on national forest lands, roads, and trails. An exception will be to allow campfires in developed recreation sites where grills and campfire rings are provided.

• Smoking is prohibited except within enclosed vehicles, buildings, or developed recreations sites where the area is cleared of all flammable material.

• Welding or operating of acetylene or other torches and blasting are prohibited.

• Operating a chainsaw, or other equipment powered by an internal combustion engine are prohibited.

• Possessing, discharging or using any kind of fireworks or other pyrotechnic device is prohibited.

• Use of explosives is prohibited.