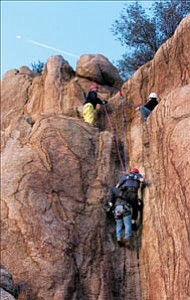 PRESCOTT – A Prescott Fire Department (PFD) crew rescued a 33-year-old California man on Wednesday after he suffered an injury to his ankle while climbing the rocks at the Granite Dells in Prescott.

PFD spokesman Jeff Jones said that two engines, a battalion chief and a technical rescue support unit took a while to locate the victim, who was at the top of a rock some 75 feet from the ground.

Jones said the exact location was about a quarter of a mile west of Highway 89.

He said a helicopter was on standby, but after they determined the condition of the climber – who had no previous training or climbing experience – the rescue team decided it could lower him without using it.

Jones said the victim was by himself when he slipped and fell about 10 feet injuring his ankle.

He said the victim was able to put some weight on that leg, and with the help from five firefighters who climbed up to get him down, was able to get to the ground.

Jones said the victim told them, “This was the first and the last time that he was going up like that.”

He said the man refused treatment and decided he would go to the hospital by himself.

Jones said that a Prescott College class of 15 people, which was in the area with its instructor to learn about the wilderness, helped by carrying their gear and other things that the firemen needed to complete the rescue. He said the instructor was part of the rescue operation.

Because the victim refused treatment, the Yavapai County Sheriff’s Office was unable to obtain his name.

The team cleared the scene two hours after the initial call, which was about 3:50 p.m.