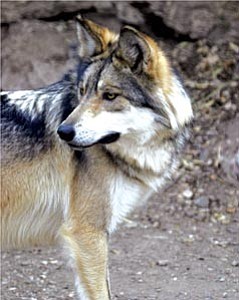 Courier/Nathaniel Kastelic One of the five new Mexican gray wolves trots out from behind some foliage to make an appearance at the Heritage Park Zoological Sanctuary in Prescott.

PRESCOTT--The Mexican gray wolf is one of the most endangered mammals in the Americas. Wildlife officials estimate there are only 300 Mexican gray wolves left, and only about 30 of them in the wild.

The five male wolves now calling Heritage Park home could play a part in that survival.

Disney said Heritage Park was selected to "receive and take care of these five wolves."

Derene said the wolves "will be 1-year-old in the spring and are almost full grown. At age 1, they are old enough to start breeding, but they are not usually successful."

Disney traveled to Phoenix International Airport Nov. 21 and 22 to get the wolves. She said sanctuary officials made arrangements with airline cargo crews for the wolves to be the "last loaded and the first unloaded."

She loaded the crated wolves into her horse trailer and drove them to Prescott.

He said the first group was placed in a small quarantine pen overnight and the second group stayed in the pen about an hour. Derene said the wolves were allowed to settle into their new home before being introduced to the public. He said a section of the wolf enclosure remains closed to the public.

"We wanted to release the wolves into their new territory as a pack. This way no one wolf would have marked territory and as a group they would sort out dominance," Derene said.

The curator said this is the first time the wolves have dealt with which animal is the "alpha male. In Columbus, they lived with their parents and four sisters. The parents were dominant. But the minute they hit the ground here, they figured it out."

Derene said the wolf hierarchy at the sanctuary is "somewhat artificial since in the wild five males would not be living together. Usually, a pack consists of parents, who are dominant, and their offspring who could be various ages. As the young males age, they would leave their parents and try to form a pack of their own."

The future is uncertain for the Heritage Park quintet. Derene said between the ages of 4 and 8 they could be released into the wild or participate in a breeding program.

"Genetically, these five are in the top 10 percent of the 300 wolves in the recovery program," he said.

Derene said the wolves need a lot of support.

"They are high-maintenance animals," he said.

Disney said the wolves have not been named.

Anyone wanting more information about the wolves or adoption can call Heritage Park Zoological Sanctuary at 778-4242.