Back to school means children and buses on the road 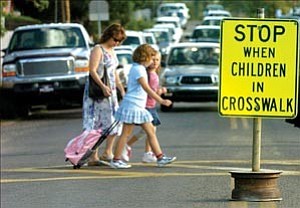 Courier/Les Stukenberg According to state law, vehicles must stop until all pedestrians are clear in all yellow crosswalks near schools. This intersection is near Taylor Hicks Elementary School in Prescott

School started Monday and with the beginning of the school year come a few extra rules for drivers.

• Follow the rules posted on signs, even if children aren't visible or if school hasn't started for the day. Some schools run programs that begin before the academic day begins, such as breakfast, sports or early classes.

• If pedestrians are in the crosswalk, drivers must wait until pedestrians completely clear the side of the street where the driver's car is.

• Law prohibits drivers in school zones from passing other cars, even if the other cars are stopped.

Morley said the police department increases its patrol officers in school zones during the first part of the school year.

Also, volunteer Citizens On Patrol station themselves near school zones and can report violators to the police.

"There is no tolerance for school zone violators," Morley said.

"The majority of people are very good about using caution and obeying the signs" near schools, he added.

The Arizona Motor Vehicle Division Customer Service Guide states that drivers must stop when approaching a school bus that is dropping off or picking up passengers, regardless of which direction the driver is traveling.

Although bus drivers encourage their passengers to cross the street in front of the bus, the MVD Guide states that drivers should watch for children crossing behind the bus.

Drivers do not have to stop for a school bus on a divided roadway.

"A divided roadway is one in which the road is separated by physical barriers such as a fence, curbing or separation of the pavement. Roadway striping by itself does not constitute a physical separation of the roadway," the Guide states.