One of the few, proud 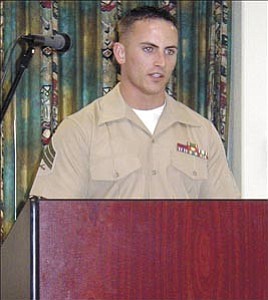 Courier/Rachelle Bump Eric Hanley, who just returned home from Iraq, speaks to residents of Las Fuentes Resort Monday, about his experiences in combat.

PRESCOTT ­ Eric Hanley joined the Marine Corps when he was 22 to experience the adventure of fighting for his country, and now, four years later, he said it was everything he expected.

"More so than I could have ever imagined," he said.

Hanley, now 25, grew up in Phoenix but spent his summers in Prescott visiting his grandparents. A few years after graduating from high school, Hanley said he decided to join the Marines.

"It was something new," he added. "Everyone says 'education,' but that wasn't my thing."

When Hanley was stationed at Camp Pendleton in San Diego, his first tour was in Okinawa, Japan, and he said, "It was a good start for my Marine Corps life. I was pleased to go out and do something different."

During the two years and three months Hanley spent over seas, he was able to travel to other countries and to many different locations, which he said was exciting, especially since "a lot of people join and stay in one spot for four years."

After his time spent in Okinawa, Hanley said he went back to San Diego for a couple of months before heading to Iraq.

"That's the point," he said. "When you join, you know you have to go over there."

Hanley said being in Iraq took a while to get used to, especially "seeing the different buildings and there was nothing around. There's no civilian clothing. It's all uniforms."

During his duty in Iraq, Hanley said he served as a military occupation specialist and his job was to refuel aircraft as they landed on base.

"We would refuel something, and it was only a matter of seconds before they would fly off to help troops in contact," Hanley said.

During the seven months he spent in Iraq, there were a few close calls, Hanley said; some of the time went by very fast and other times went by very slow.

One thing that helped, he said, was receiving cookies from the residents at Las Fuentes, where his mom works as a housekeeper.

Several months ago, Matt Jayich, a resident at Las Fuentes, organized a team of cookie makers and started sending containers of cookies to soldiers in Iraq, and Hanley was the first to receive a batch.

"The cookies were definitely a morale booster," he said.

On Monday, Hanley spoke to the residents at Las Fuentes, telling them about his experiences at war. He said it was always inspiring and uplifting to receive food or any other items from people in the U.S.

Jayich said he started the cookie fund to Iraq because he understands the hardships of war and wanted to help.

"This is a war and a war we've never been in before," he said. "It's a rough life. Actually, it's not life at all. It's hell. So you have to appreciate young men like this."

After his speech, residents went to Hanley and thanked him for his service to the country.

"In 60 years, you'll look back and smile at this," one resident said, and another added, "Thank you for everything."

"Our residents here have that cookie fund, and to actually see and talk to someone who their work of love was sent to is so rewarding for them," she said.

Hanley said he is visiting his mom and grandparents in Prescott for the next few days, and then he will move to Florida to be with his wife.

He said he will always be proud of his service to his country, but for now, "I'm just glad to be home."