Officials could face charges for digging up alleged Billy the Kid 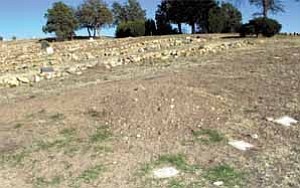 Courier/Nathaniel Kastelic This is the spot, above, in the Pioneers¹ Home Cemetery where the former Lincoln County, N.M., sheriff and others dug up and took bones that they hope belong to John Miller, who claimed to be Billy the Kid. The only authenticated photo of Billy the Kid is at left.

PRESCOTT ­ Did New Mexico deputies violate the law by digging up the remains of a Prescott man who claimed to be Billy the Kid?

Local authorities are investigating whether the former sheriff of Lincoln County, N.M., and others violated Arizona law in a Prescott cemetery by digging up and removing the remains of John Miller, who told friends he was William Bonney aka Billy the Kid.

A shoulder bone from Miller's grave already indicates damage consistent with that of a gunshot wound that The Kid suffered, Sullivan said. The skeleton's protruding teeth and small stature also are consistent with Billy, he said.

Since Garrett was friends with The Kid, he might have shot him and then let him escape, Sullivan said.

He hopes to see DNA results within two months.

Sullivan and others removed what they hope are Miller's teeth and a femur from an unmarked grave in the Pioneers' Home Cemetery on May 19, 2005. They also removed a femur from a neighboring unmarked grave, just in case that was Miller. The History Channel taped the event.

A Billy the Kid historian from Tucson named Dave Snell recently filed a complaint with the Yavapai County Attorney's Office, which forwarded it to the Prescott Police Department (PPD).

"This is some kind of good ol' boy back-slappin' beer-drinkin' crusade," Snell said. "He's buried in Ft. Sumner, where he's always been."

PPD Det. Anna Cahall contacted several of the people present at the disinterment, ranging from Dr. Laura Fulginiti of the Maricopa County Medical Examiner's Office to Dale Tunnell, a former federal officer involved in the Billy the Kid investigation with Sullivan. Tunnell hired Fulginiti to help.

Now Prescott City Prosecutor Glenn Savona is trying to figure out whether someone violated the law and whether the city or state has jurisdiction since the State of Arizona owns the Pioneers' Home Cemetery. He noted that time is running out because officials would have to file any misdemeanor charges within a year of the alleged offense.

Complicating matters is the fact that the person who apparently gave Sullivan permission to dig up the grave, former Pioneers' Home Superintendent Jeanine Dike, is away on a Mormon mission until June 2007.

Sullivan and former Capitan, N.M., mayor Steve Sederwall now are commissioned as Lincoln County deputies, Sullivan said. They are in the midst of a 3-year-old investigation into whether Billy the Kid actually is buried in Ft. Sumner.

In the early 1900s, several aging men claimed to be Billy the Kid, including Miller and "Brushy" Bill Roberts. Sullivan and his fellow former lawmen are on a mission to find the real Billy using modern-day technology.

Miller is the only person they have dug up so far. They haven't been able to obtain a court order to dig up Billy the Kid's mother in Silver City, N.M., Sullivan said.

Miller spent his last days as a resident of the Arizona Pioneers' Home in Prescott. When he died in 1937 at the apparent age of 87, gravediggers buried him at the Pioneers' Home Cemetery here.

The late Helen Airy wrote a book about Miller to back up her theory that he was Billy the Kid. She entitled it, "Whatever Happened to Billy the Kid?" Miller told several people that he was the notorious outlaw of Lincoln County War fame.

Dike apparently agreed to let Sullivan and others dig up Miller's unmarked remains under a relatively new state law that allows the action without a court order and permit if it's for "internal management," according to a Prescott Police Department report.

"It doesn't look like the request came for an internal issue," Savona said. That law doesn't allow people to take the remains, either, he added.

Dike had just retired when the disinterment occurred. Since the new superintendent had not yet arrived to start work, a Pioneers' Home administrative assistant named Dale Sams attended the disinterment, according to police records.

The only other way to legally disinter the body is to get a permit from the Yavapai County Community Health Services Department after getting a court order or family permission.

Fulginiti and others told police that Tunnell assured them he had permission to conduct the dig.

He admitted that the men didn't want to deal with another court battle like the one they faced in Silver City, where Silver City and Ft. Sumner officials were among those trying to stop them.

"Why don't they want to know the truth?" Sullivan said. "It was like we were treading on sacred ground."

Current Pioneers' Home Superintendent Gary Olson, who started the job just a few weeks after the disinterment occurred, said he will take the written advice of Yavapai Community Health Services Director Marcia Jacobson and create a policy that states people need a permit to dig up Pioneers' Home Cemetery bodies.

Pioneers' Home officials are trying to figure out who else Sullivan and the others dug up at the cemetery, whether they have any relatives and whether the state will demand the return of all the bones, Olson said.

Officials won't file charges in Billy the Kid grave case
Back at rest
Law allows digging but not taking bones
<I>Dead ringer?</I><BR>Was man buried in Prescott one of <BR>history's most infamous gunfighters?
Editorial: Is Billy McCarty Jr. buried in Prescott?