Disappointment – or a perception issue? 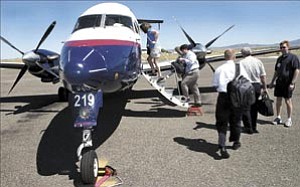 PRESCOTT – To local officials, the current situation with the commercial air service at the Prescott Airport is a “disappointment,” but to the CEO of Great Lakes Airlines, it boils down to a “perception issue.” State and local officials are taking a wait-and-see stance.

Regardless of the various takes on the situation, however, more than 600 local passengers a month apparently switched their travel habits over the summer and found non-flying options to get to Phoenix’s Sky Harbor Airport.

Three months have passed now since Great Lakes Airlines took on the commercial air service at the Prescott Airport, and monthly paying passenger totals continue to hover well below the 200-passenger mark.

That compares with about 800 passengers per month this past spring, when Mesa Airlines was providing the flight service for the Prescott Airport.

Although options exist for dealing with the situation, officials at the federal, state and local levels say those actions are either months away or may be too risky.

In June Great Lakes Airlines took over the commercial air service at the Prescott Airport, as well as for several other rural Arizona communities, through a federal Essential Air Service (EAS) contract.

For months before that, Prescott officials had resisted the change to Great Lakes, maintaining that the Prescott Airport would suffer from the resulting switch from Sky Harbor’s terminal 4, which Mesa uses, to terminal 2, which Great Lakes uses.

When Great Lakes conducted its grand opening at the Prescott Airport in June, its first week or two had shown a dramatic drop in passenger numbers. Even so, city officials cautioned at the time that it was too soon to judge the airline’s numbers.

However, the summer months – usually the busiest time at the Prescott Airport – failed to show much improvement.

Airport Manager Rick Severson reported this week that 135 paying passengers boarded Great Lakes planes at the Prescott Airport in June. In July the number rose to 145, and in August it stood at 142.

Both local and airline officials say the numbers fall far short of what they were hoping to see.

“We are not happy with this at all,” Mayor Rowle Simmons said of the stagnant passenger numbers. “I am extremely disappointed.”

Great Lakes CEO Charles Howell IV acknowledged that the numbers are well below the airline’s forecasts. However, he maintains the community’s negative attitude about the new air service provider likely is contributing to the low passenger numbers.

“Prescott seems to be prejudiced that our presence is not going to work,” Howell said Friday from his office in Cheyenne, Wyo. “It becomes a self-fulfilling prophesy.”

He added: “It’s too early in the program to say the sky is falling,” adding that if local officials say it enough, “people begin to believe that.”

Instead, Howell suggested that a positive attitude likely would translate into more passengers, which in turn would help to ensure that Prescott continues to receive its airline subsidy. “If it’s not used, people will wake up one day and not have air service,” Howell said. “It is imperative that this is a use-it-or-lose-it program.”

Officials at the local, state and federal level all acknowledge that Great Lakes’ current numbers do not meet the standards for the federal EAS subsidies.

“Under law, a community is not eligible for subsidies if (the per-passenger subsidy cost) exceeds $200,” said Bill Mosley, public affairs specialist for the U.S. Department of Transportation. He added that Prescott’s subsidy currently exceeds that number.

However, Mosley said, Great Lakes’ current contract runs until June 30, 2007, and a review might not occur until that time unless the federal department had a reason to evaluate it earlier.

Severson also agreed that the low passenger numbers could cause a termination of the existing airline contract. At this point, he said, “USDOT is not going to cancel it. They want to give it a chance.”

Local officials have stressed all along that the main problem with Great Lakes involves the lack of access to terminal 4, which serves America West Airlines.

Currently, passengers on Great Lakes flights from Prescott must leave the secure area at Sky Harbor if they switch to an airline at terminals 3 or 4, take a shuttle between terminals and go through security again.

Howell maintains that the concern over terminals is a “perception issue. People connect in airports all across the United States.” He argued that the need to take a shuttle from terminal to terminal “is a Sky Harbor problem, not a Great Lakes problem.”

Along with the issues over terminals, Severson noted that other customer complaints from locals have involved Great Lakes’ fares. While Mesa allowed an economical add-on for connecting flights on America West flights, a similar deal is not available through Great Lakes.

Howell responded that comparing fares from four or five months ago with today’s fares is “not a true apple-to-apple comparison,” because of increasing fuel costs. He also pointed out that Great Lakes offered a recent fare sale that was comparable to Mesa’s previous add-on fare.

The company-wide sale did not receive much exposure in the Prescott market, however, because advertising money was not yet available through ADOT, which is administering the grant that originally brought the rural airport consortium together.

However, the lack of advertising could be changing soon. This past week, ADOT officials met with representatives from Great Lakes, as well as each of the five communities participating in the consortium.

The result of the meeting: The five communities will evenly split the grant money earmarked for advertising, with about $53,000 going to each community for individual advertising and marketing campaigns.

Severson said the matter now has to go to the City Council for acceptance of the grant money. He expected that matter to go to the council in October, at which time he hopes to have a draft advertising campaign for council review.