1st round to Bears 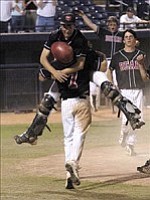 Courier/Les Stukenberg Catcher Seth Heinbaugh leaps into the arms of Matt Riesberg after Riesberg scored Monday¹s winning run in the bottom of the seventh.

The Bradshaw Mountain junior singled to center field to score teammate Matt Riesberg in the bottom of the seventh inning and advance the Bears to a date today with Centennial.

But this was no ordinary game-winning RBI. O'Conner's hit beat rival Prescott, 6-5, a school that he just happened to attend last year.

"I was scared, going up against my old team. It was something out of the movies," said O'Conner, who played on the Prescott JV last season. "He threw me a curveball and I just stuck my bat out there and got a hit."

O'Conner's slap down the middle represented a climactic end to another memorable game between the two local schools. It offset a game-tying single by Prescott's Pat Fisher in the top of the seventh as the Badgers tried to send the game into extra innings.

"We knew this wasn't going to be a shootout," BMHS coach Randy Clifford said. "What was going to be the difference was who's laying the bunts down. That's what it comes down to in these tight ballgames. It comes down to executing."

The outcome also came down to clutch pitching. Bradshaw's Kris Vanzant and Prescott's Dillon Baird battled all night, each getting out of various jams to keep the game close.

Although just a first-round game, Clifford felt he had to go with his top pitcher.

"I thought the game last Thursday was not indicative of how Prescott can play," said Clifford, referring to a 17-7 mercy rule victory over the Badgers. "The reason I threw Kris Vanzant is I thought they would be that much better. I felt I had to throw my best to beat them today and that's really what it came down to."

"I felt pretty good but I thought I struggled a little bit tonight," Vanzant said. "My defense helped me out and we had some huge, huge hits."

Baird, meanwhile, went the distance for PHS with six strikeouts and just one walk.

"I thought they showed pretty good composure when guys got on base and in tight situations," Badger coach Kent Winslow said. "Both teams came out with clutch hits a couple of times. We got a Œtweener to fall there to tie it and then they got a Œtweener to win it."

The two teams traded blow after blow down the stretch after the Bears had built a 3-1 lead through the first three innings.

The rally started on defense with PHS pulling off some big plays to keep Bradshaw off the scoreboard in the fifth. First, Rick Anton scooped the ball out of the dirt at first base for an out and later to end the inning, Billy Bruen made an exceptional play at third on the stop and throw.

Prescott tied the game in the top of the sixth but with a little help from the Bears. Fisher bunted down the first-base line and advanced to second when the throw hit him in the back. After moving to third on a Bruen flyout, Fisher scored on a Tim Winslow grounder to the shortstop.

Baird followed with a single and made it over to third on a stolen base and error when a throw from the catcher ended up in center field. Ben Kelley then singled to left to score Baird and the game was tied.

Playing "small ball," Bradshaw Mountain regained the lead in the bottom half of the sixth. O'Conner got things started with an infield single and moved over to second on a Sean Copeland bunt down the first-base line.

T.J. Andrews followed with a bunt of his own, moving both runners over on the sacrifice. With one out and PHS trying to protect the tie, No. 9 hitter Nick Groblewski hit one to second baseman Brad Roche, who did not hesitate in coming home to try to nail O'Conner. But O'Conner slid under the tag and the Bears were back on top.

That set up the thrilling seventh inning. Prescott's Anton drew a quick walk and was replaced on the basepaths by pinch runner Austin Shaw. Roche moved the runner over with a bunt single down the first-base line. Roche was able to avoid a tag attempt by Bradshaw's Vanzant and then he beat out the throw.

But Prescott's fortunes seemed to take a bad turn with Todd Citron at the plate. With PHS again trying to move runners on the bunt, Citron hit one directly in front of the batter's box. But he apparently thought it was going to be called foul.

"He should be running on that," Winslow said. "Unless the ball hits you, you cannot be an umpire. It was a high-school mistake. Chances are if you did that a hundred times, it's only going to happen once."

Bradshaw's Heinbaugh quickly picked up the ball and fired over to third to force out Shaw. Groblewski then fired to first for the out on Citron to complete a rare double play on a bunt. Smart baserunning by Roche, however, got him over to third base and he would score on Fisher's single up the middle.

"I thought for sure when that happened, that's fate right there," Clifford said. "I've never seen a double play on a bunt. It was one of those things where we didn't know quite what to do, so we kept throwing it."

In the bottom of the seventh, Baird fanned the first batter he faced before walking Riesberg. It was the first walk Baird had allowed the entire game, and it would prove to be costly.

But even more damaging was a pickoff attempt on Riesberg at first base. The throw ended up in right field as Riesberg moved into scoring position.

Baird recovered for another strikeout to set up the showdown with O'Conner. The rest was history.

Prescott falls into a loser's bracket game and will face Cactus at 3 p.m. today. The Bears move on to play second-seeded Centennial at 5 p.m. today.

EXTRA BASES: In the other first-round game Monday, No. 5-seeded Cactus eliminated No. 6 Shadow Mountain, 6-2. ... First pitch went off 40 minutes past the scheduled start because of when the first game ended. ... Bradshaw's Heinbaugh threw out the first two baserunners who attempted to steal on him. ... The two teams played error-free ball until a Bradshaw throw in the dirt toward first base in the top of the fifth inning. ... The Badgers did not strand a runner on base until the fifth inning. ... Shadow Mountain athletic department staff worked the tournament.