Lifeguards make the grade for job 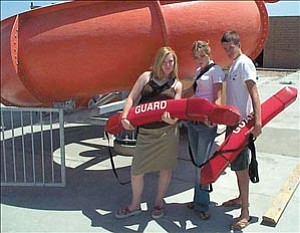 Courier/Ken Hedler Chino Valley lifeguards, from left, Kelsie Sharp, Morgan Chambers and Fritz vonSchlegell stand next to the water slide at the town swimming pool that will open later this month at Community Center Park.

CHINO VALLEY – The Town of Chino Valley plans to open its first swimming pool later this month, and has hired 18 part-time lifeguards through the season that ends Sept. 24.

The aspiring lifeguards also needed to swim 500 yards nonstop, and pass a written exam as well as a test in which they responded to a simulated drowning or another emergency involving a pool user, Martinez said.

“We had to do a lot of book studying,” said lifeguard/swim instructor Kelsie Sharp, 16. “You had to think quick and do it (the simulations) correctly.”

Kelsie and her 17 peers passed the exam, Martinez said. She added that 10 of the youths also took the 47-hour Red Cross class for water safety instructors in order to teach swim lessons at the pool.

Altogether, the town’s Parks and Recreation Department hired 25 youths to work at the aquatics center for jobs that pay $6 to $9 an hour, Human Resources Director Judi Schafman said.

Parks and Recreation had planned to open the pool this Saturday and scheduled a “pre-opening ceremony” for 5 to 8 p.m. that day. However, Martinez said the pool will not open until an unspecified day later this month.

Martinez said the contractor, Low Mountain Construction of Phoenix, will add plaster on Monday, fill in the pool and open it once the Yavapai County sanitarian inspects it.

And, once it opens, Kelsie and the other youths will dive into their new responsibilities. “I am doing miscellaneous office work, planning (and) phone calls,” Kelsie said. “It is definitely a fun job.”

Kelsie, an aspiring Broadway singer and actress who will begin her senior year at Chino Valley High School Aug. 1, described her peers as “great.” They work hard, have a sense of humor and work well together, she said.

They include incoming CVHS seniors Morgan Chambers, 17, and Fritz vonSchlegell, 16. Morgan will work in the snack bar, teach swimming lessons and assume lifeguard duties in August, and Fritz will be a lifeguard and teach swimming.

Morgan said she regards being a lifeguard as a “dream job,” adding that she lives in a home with a swimming pool.

She said she will acquire skills, such as CPR, that will help her to land other jobs later on.