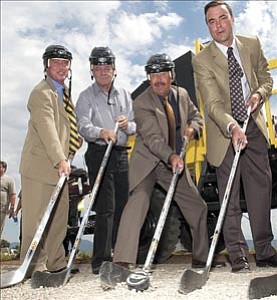 Rees, the Prescott Valley Chamber of Commerce director and well-known promoter of the Prescott Valley Convention and Events Center, emceed the festivities at Main Street and Florentine Road. Past and present county supervisors, a state representative, Town Council members from the area’s four municipalities, the Fain family, officials from the Central Hockey League and Global Entertainment Corp., and many other residents attended the event.

Global Entertainment Corp. and the Fain Signature Group will share ownership of the $24 million, 5,100-fixed-seat arena. Representatives from both groups said that they expect that the arena’s concerts, minor-league hockey games, trade shows and other events will draw visitors from at least a 90-mile radius around the town. They hope to open the building in the fall of 2006.

Brad Fain, a principal in the Fain Signature Group, said, “Meeting and convention centers are a $102.3 billion industry and growing. Right here in Prescott, the four-day event known as Frontier Days produces a gross economic impact of more than $20 million to our area. That is over $400,000 of direct tax benefit. Soon, Prescott Valley will be able to host many of these events of that caliber every year.”

He said the center will allow Prescott Valley to compete for conventions on a statewide level. Fain noted that the Phoenix Civic Plaza has provided a $1.5 billion economic impact during the last 30 years, and hosts about 540 events annually. The plaza’s convention attendees spend about $160 million per year, he said.

In the past, Fain and council members have expressed hope that several hotels will open near the arena. After the event, Fain said that 14 to 18 hotels are interested in downtown Prescott Valley, but added that only five of those have shown serious interest. Eventually, Fain hopes to develop the entire area around the center and build a mixed retail shopping area that would allow tourists an easy walk from the Harkins Theatres area north to the convention center.

Fain also confirmed that he is speaking to retail businesses about leasing buildings near the arena.

“It really does not compete with us,” he said. “Business begets business. When they are successful, I am successful, and vice versa.”

Jogerst has a long-term goal of expanding the size of his theater complex from 14 to 18 screens. He said the theaters will expand when it does about double its current amount of business, and added that the arena will help him reach that goal.

Gary Marks, the director of the Prescott Valley Economic Development Foundation, said the arena could aid Prescott Valley’s quest to lure corporations to the town because it shows that the local economy can support a diversity of businesses.

Rick Kozuback, the chief executive of Global Entertainment Corp., said that the group still needs the approval of the Industrial Development Authority in September before receiving final approval on their $24 million loan. The Fains and Global need the loan so they can pay for the arena construction.

Kozuback also confirmed that town officials from Joplin, Miss., and Yuma have also shown preliminary interest in arenas, but have not approved any agreements with the company.